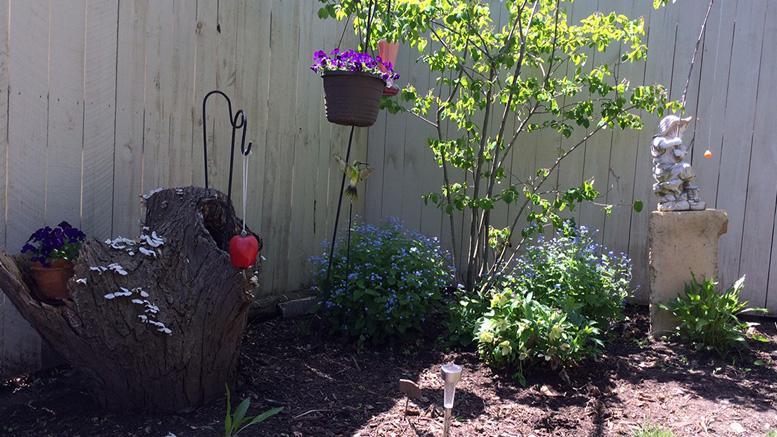 This corner of our backyard garden delights and educates us. Photo by: Nancy Carlson

An amazing amount of beauty can be packed into a tiny backyard garden, but the same goes for drama, confusion and opportunities for education.

Drama? Our dog Toby was about to eat a wasp in ours the other day, before I shooed it away at the last second.

Confusion? An apparent slow learner, Toby did  eat a wasp last year. Not one to back down from a fight just because he was being devoured, that wasp registered its disapproval by harpooning Toby the whole messy slide down and out his nether regions. Our poor pooch spent the rest of that day stumbling around in the grass like he was stoned out of his gourd.

But on to beauty…

Nancy and I were sitting on our back deck recently admiring the colors already present. There was verdant green in our corner serviceberry tree, and a rash of baby blue False Forget-Me-Nots beneath it. Then there was the deep purple of the violas she had planted, including some in a clay pot stuck in a hollowed out stump that was also sprouting slivers of white fungi.

And education? In sixty-eight years, this was the first I’d heard that violas were flowers! Here all along I thought violas were the stringed instruments providing the alto voice of the violin family. You know, the ones with the top string being an A note, as opposed to a violin’s E note. In other words, the one that when violin snobs joke, “What’s the difference between a viola and a vacuum cleaner?” the answer is, you have to plug in a vacuum cleaner before it sucks.

Hahaha. But these are just observations off the top of my head. I didn’t look them up on Google or anything.

Anyway, that corner of our garden is a beautiful little place to behold. This is particularly true when accented by the crimson plastic of the hummingbird feeders, ready to greet the arrival of those little needle-beaked dive bombers. Now we also await the blooming of even more colorful plants, coaxed from the dirt by our friend, the green-thumb wielding Mary Beth Lambert. It is she who planned and planted the butterflies, birds and bees garden bordering our backyard fence a couple years ago.

From where we normally sit – Nancy nursing an invigorating cup of tea and me nursing a decidedly un-invigorating glass of definitely not tea – the sight of our butterfly bush is worrisome. It’s looking dry and spindly and, for lack of a better word, dead, but hopefully it’ll perk up. Last summer it lived up to its name, drawing scads of butterflies ranging from the mundane, if any butterfly can be called mundane, to the downright spectacular. We raised a bumper crop of caterpillars, too, the fat lime green ones with black and yellow dots. Unfortunately, they also provided a sobering lesson in why you shouldn’t develop proprietary feelings for squishy garden critters, since they all wound up as bird sushi before they could blossom into butterflies.

One dark night – in terms of my mood, I mean – five disappeared.

But the bees part of our butterflies, birds and bees garden? That is going spectacularly. There must have been ten or twelve of them out there one recent morning, buzzing through the air singly and in pairs.

My first reaction was to take umbrage at this. Who said anything about worrying? I’m a full-grown man. Even a slightly over-grown man in certain waist-related respects. But when I was a kid, bees were all over the place, my bare-footed buddies and I accidentally crunching them regularly. Do you think we were the sort of whiny little wimps who would run screaming into the house for our “mommies” every time a bee nailed us?

OK, sure we were. But a little torturous digging with tweezers would soon have the stinger out and us on our way to our next painful bee rendezvous.

Now I realize that our naming of bees back then was largely based on demographics. Those big, droning, black-and-yellow fellows? To Nancy and her siblings on their central Illinois hog farm, they were bumblebees. To me and my northern Ohio buddies they were yellow jackets. Other bees, the kind that make honey? They were just plain bees.

But for me, the “wood bees” Nancy noted were a whole new thing. In googling them, the site for carpenter bees – so named because they drill holes in your wood – popped up. It warned me they will readily buzz your head just to show you who’s boss, but for the most part Nancy was right. They’re generally laid-back, pacifistic, hippie-type bees, although the females of the species do have stingers, which they’ll use if you piss them off.

Not so unlike human wives and us hapless husbands, I guess.

But you know, in the final analysis, that’s OK. This is the perfect time to remind yourself that bees need our support. Bee populations have declined precipitously, an unnatural phenomenon with all the makings of a spooky seachange. If that notion doesn’t scare you … well, you and our dog Toby may be kindred spirits.