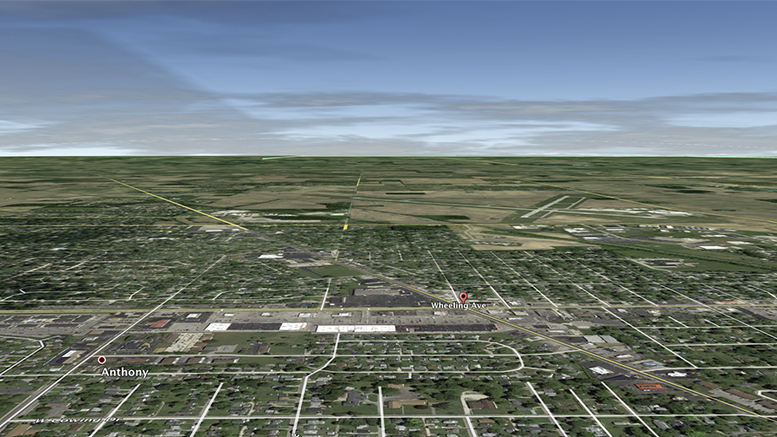 Wheeling Ave is pictured running diagonally across the city via this image courtesy of Google Earth.

The city’s plans to widen Wheeling Ave requires Indiana & Michigan power to replace and move power lines and poles between McGalliard and Bethel.

Depending on the location, individual poles will need to be moved 1 to 15 feet.

For reasons of safety and to help prevent outages, a clearance zone must be maintained between wires and trees. Trees are the No. 1 cause of outages. I&M is working to reduce the number and duration of outages. The standard clearance zone for this type of line is 15 feet on each side.

I&M foresters spoke with individual property owners to discuss the work being done. I&M’s professional foresters determine which trees have to be removed and which can be trimmed and preserved. Many of the trees that were removed are on city right of ways.

The tree work is substantially done. There may be a few spots still needing cleanup.

Duke Campbell, superintendent of public works said,”The tree work is what is most visible right now. What you don’t see is the process leading up to that. Which was—the purchase of right of way, and signing of agreements with property owners to move their advertising signage, business signage, etc.  They were all paid. We had to do right of way transactions on 38 parcels. Some  trees had to come down that were on private property. That’s Indiana & Michigan’s responsibility. They’re the first ones to go in, and then the water and gas will go in. Then sanitation and storm sewers.”

The project will eventually include the addition of ADA (Americans With Disabilities Act) compliant sidewalks. 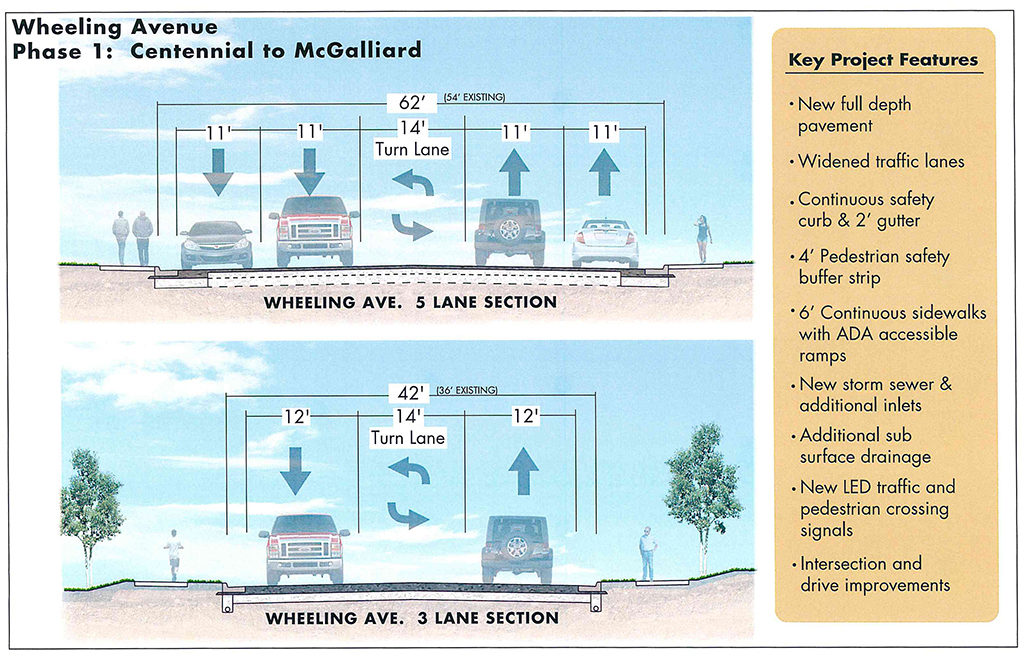 Work on the electrical line will begin in coming weeks and is expected to continue into the fall. 80 new poles will be placed. The line is being upgraded from a single line to a 3-phase line. The upgrade allows the line to deliver more energy.

The electrical line is also being reconfigured so it will have two sources of energy instead of one, to improve reliability.

Campbell said,”Traffic will move as smoothly as possible. There may be one shutdown of Wheeling when it comes to Centennial, when the traffic lights poles are moved and the big transmission lines for I&M need to be moved. I think they are going to try to do that all at once, so people will have to detour onto Centennial and hit Bethel or take Centennial and hit Walnut.”

The plan, known as the Transportation Improvement Plan or TIP is part of a program where the city is required to “plan ahead” and submit the request to the federal government so they can review it and tell INDOT, “Yes, there will be money there.” So once the project and dollars are programmed into the city TIP plan, the project can continue.

Campbell said that the city started getting hot mix on Monday, March 18, 2019 to use instead of cold mix, to patch potholes. “Cold mix does not last, especially when we have all this ground saturated with water,” he said.

A new, larger storm drain is being installed on the former Storer Elementary Property to help alleviate significant flooding in the area. In a neighborhood meeting with the Westbrier neighborhood group in August of 2018, Mayor Tyler indicated that the city did not have any interest in further development of the Storer Elementary property unless the drainage issues were fixed. Mayor Tyler said due to the water drainage issues in the area, the Muncie Sanitary District would address the drainage issue as one of their top 5 projects for 2019. The project has now started, and will allow the city to continue looking for further development opportunities on the north end of the property. The new storm drain is twice the size of the old one and will run from Mansfield to the creek on the south end of the property.

New, larger drainage pipes are being installed on the west side of the former Storer Elementary property. As photographed on April 3, 2019.

The railroad crossing bridge on 23rd Street has been under construction for quite some time. As a reminder, the city would like to let residents know that the bridge project is not the responsibility of the City of Muncie. Many residents are calling the city about the timetable for completion. Bridge projects are the responsibility of the Delaware County Commissioners. 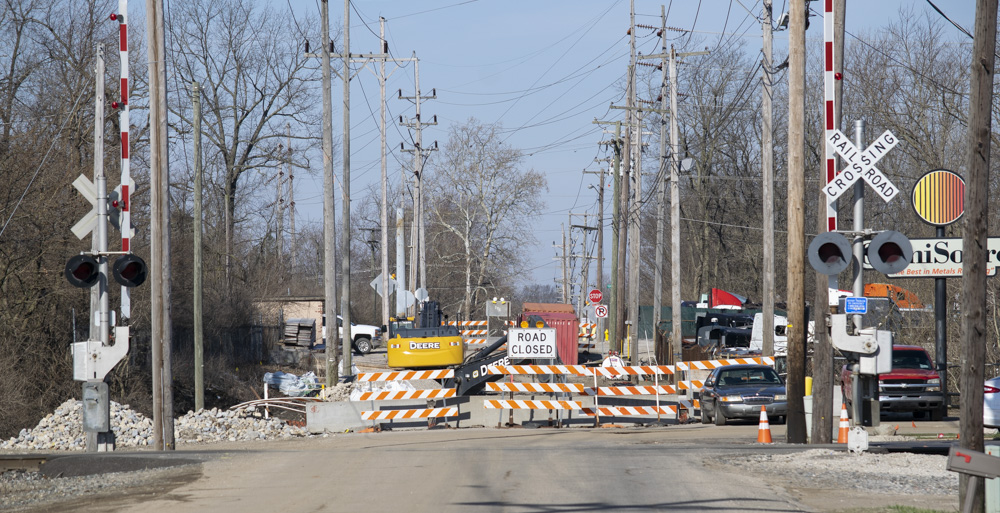 Questions concerning the 23rd Street bridge should be directed to the Delaware County Commissioners Office and not the City of Muncie.