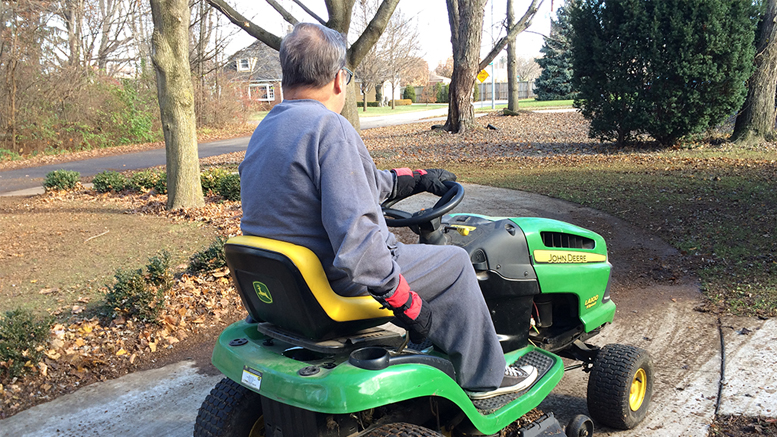 Who needs a rake when you have one of these? Photo by: Nancy Carlson

I love trees. I do until fall, anyway. Then I hate trees.

Trees wouldn’t be so bad in the fall, of course, if only they didn’t have leaves. I could really go for that. Or, I could go for trees that had leaves, providing those leaves stayed on the trees forever and ever, never littering the ground.

Tree scientists should look into that.

Granted, though, leaves are special. One special thing about them is, depending on the type of tree they are from, leaves come in assorted shapes and sizes. I learned this fascinating nature fact back in seventh grade, when I was tasked with assembling a leaf collection.

It was about noon on a Sunday, and my Mom, Dad, sister Patty and I were back from church, preparing to tuck into a big bowl of porcupine balls. No, this was not some exotic dish developed to control Ohio’s exploding porcupine population. Porcupine balls were simply big beef meatballs dotted with rice kernels and coated in spaghetti sauce. Meanwhile, with our home being on the western side of Cleveland, a cornucopia of ethnic diversity, our television set blared the incessant, pounding, oompah sounds of Dad’s favorite music show, “Polka Varieties.” I want to say the band playing that day was Stanky and the Pennsylvania Coal Miners. This is because in my memories, Stanky and company seemed to always be playing on “Polka Varieties.” The song, almost undoubtedly, was their big polka hit, “Who Stole the Kishka?” an upbeat yet poignant protest of the heartbreak of sausage thievery.

That was about as much forethought as I ever gave anything.

My admission caught Dad in mid-porcupine ball. This was before I had accumulated so many F’s on my report card, he knew there wasn’t a snowball’s chance in hell of me ever becoming a world-famous brain surgeon. No, at this point, there was still an outside chance. That explains why two minutes later, the porcupine balls, “Polka Varieties” and Stanky and the Pennsylvania Coal Miners were forgotten. Now, he and Mom were running frantically through a nearby woods, snatching up every leaf they could lay their hands on to save my grade. Then they hurried home, mounting and illustrating a leaf display so beautiful, I could hardly believe it was mine.

Which, of course, it wasn’t.

“Well, whadaya say?” Dad asked, when it was finally finished.

“Gee whiz,” I replied profoundly, wracking my brain to communicate my deepest appreciation for the pristine collection now resting in my unsoiled little hands. Trying to convey something of the deep understanding of leaves that my parents’ selfless afternoon efforts had suddenly imparted to me, I ventured, “It’s, like, the leaves are all, you know, kinda dif’ernt and stuff.”

Such insight earned me an A+ on my leaf collection, plus suspicious looks from my teacher.

Shortly after that, though, Dad dolefully accepted the fact that, barring an unfortunate mix-up in the maternity ward, he had fathered an academic mutant, and sat me down for what I think of now as the talk. “Son,” he told me, serious as a heart attack. “I realize now you will likely end up a ditch-digger, but I want you to be the very best ditch-digger you can be.”

Anyway, that is at the root, pun intended, of my leaf psychosis today. It also explains why I am a dedicated leaf mulcher. Sure, I’d like to be somebody who fastidiously scoops wads of leaves into trash bags for disposal. But I recoil at the thought of touching them, due to the painful memories they stir up in me. No, just pour some gasoline into my little John Deere tractor and I’ll rip those veiny little jerks to shreds, all the while cackling with glee.

Recently I had to do just that with a lawn full of wet leaves. Nancy and I had gone out of state for a week. Returning home, we found that every leaf on our place had hit the ground over the past seven days. Then they’d been rained on, snowed on, iced on and who-knew-what-else on. This was far from ideal for mulching. In doing so, I pretty much left my lawn with a six-inch coating of leaf-based sludge covering every square inch.

I was also left with the lingering guilt of middle-class leaf incompetence. Were I a decent human being, my lawn would look like some of my neighbors’ lawns, those being lawns of inordinate beauty, without a stinking leaf left in sight. But come next spring, I predict my sludge is going to leave me with the best fertilized lawn in the whole neighborhood. That, or my lawn is going to look like someplace where elephants wrestled.

Either way, I still hate leaves.