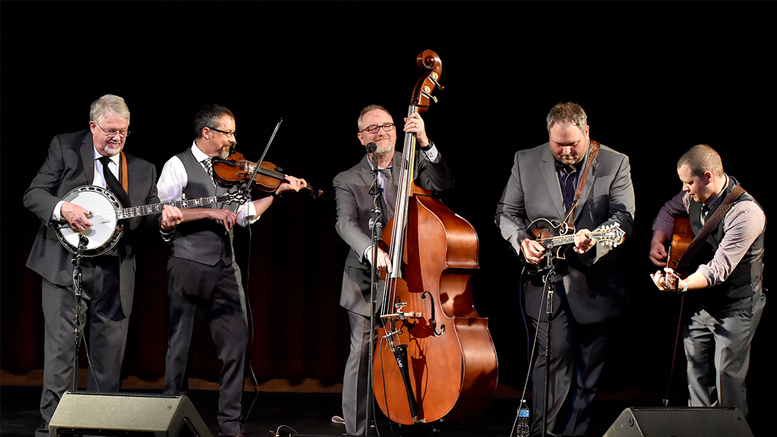 Muncie, IN – Acclaimed Bluegrass group Balsam Range will be performing in a FREE outdoor concert as part of the 2018 Muncie Three Trails Music Series. The concert will take place at 7:00 PM on Friday, July 13th at Canan Commons (500 S. Walnut St.) in the heart of downtown Muncie, IN. Indianapolis-based Flatland Harmony Experiment will open the show.

Balsam Range’s ascent to the top of the Bluegrass world has left a well-marked trail of success since the band’s inception in 2007. One of the genre’s most respected groups for both their vocal AND instrumental prowess, they have garnered eighteen International Bluegrass Music Association (IBMA) Awards on the heels of seven critically acclaimed albums. And in 2017 Balsam Range garnered eight nominations from the IBMA, more than any other artist save the Earls of Leicester (who appeared at the 2017 Muncie Three Trails Music Series). Balsam Range won the 2017 award for Bluegrass Album of the Year (Mountain Voodoo) and also garnered nominations for Entertainer of the Year, Song of the Year, Gospel Performance of the Year, Vocal Group of the Year, and Instrumental Group of the Year, as well as individual nominations for Male Vocalist (Buddy Melton) and Bass Player (Tim Surrett).

Balsam Range has left audiences spellbound while headlining major festivals from coast to coast, selling out venues across the nation, and appearing multiple times at the Grand Ole Opry. On their newest release, Mountain Voodoo, the quintet cleverly captures traditional yet contemporary sounds. There are fiery instrumental parts alternating with deep heavy ballads, overlaid by the vocal harmonies the group has become known for. Debuting at number four, “Mountain Voodoo” remained on the Billboard chart for nineteen weeks. The first single, “Blue Collar Dreams,” spent 3 consecutive months at the number one spot on the Bluegrass Today charts.

The Muncie Three Trails Music Series is a non-profit partnership between Muncie Downtown Development Partnership, Muncie Arts and Culture Council, and Rick Zeigler, series founder and organizer. The mission of the series is to bring critically acclaimed, national recording artists to perform at Canan Commons, Muncie’s premier outdoor performance venue, located in the heart of Downtown Muncie. A second mission is to promote the many recreational, artistic, and cultural attractions located along, or in close proximity to, Canan Commons and Muncie’s popular “Three Trails” — The White River Greenway, Cardinal Greenway, and Muncie Arts and Culture Trail. We hope attendees will heed our slogan, “Explore the Trails, Enjoy the Music.” Complete information about the Muncie Three Trails Music Series can be found at www.munciethreetrails.com.