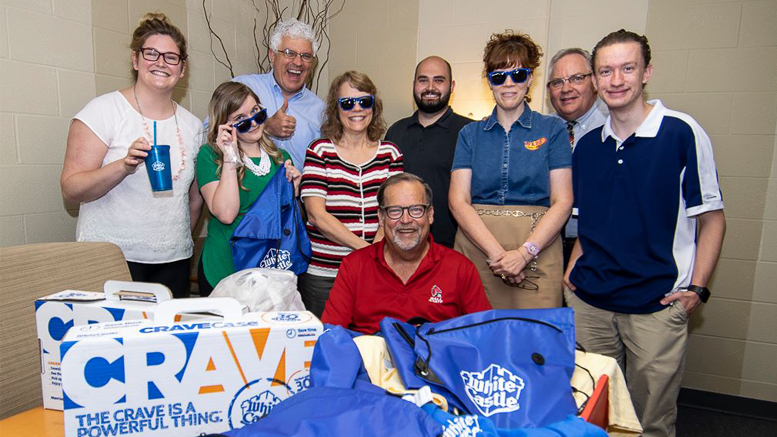 You never know who you’ll find in the Cravers Hall of Fame. Photo by: Mike Rhodes

The recent announcement that the Miss America contest was scrapping its swimsuit competition came as a welcome victory to us non-sexist pageant people.

We’re not just pieces of meat, ya know?

By now, some of you may be saying, “Pageant people? Did I miss something? Is somebody starting a new pageant to pick, like, Mister American Chunk-Butt USA?”

It’s just that, for the last five weeks or so, I have felt giddy as a pageant contestant with a legitimate shot at a title. This has been ever since I was urged to nominate myself as a 2018 candidate for White Castle’s Cravers Hall of Fame.

It all started after I wrote a Muncie Journal column about my White Castle addiction. A week later, my friends and I at Muncie Journal and Woof Boom Radio were treated to a surprise delivery of a hundred free sliders, along with White Castle hats, shirts, sunglasses, cups, backpacks and kitchen aprons. I also received a nice email from my now Facebook friend and slider big-shot Graham Shippy. It read – and I quote – “If you haven’t thought about it already, you might consider applying for the Cravers Hall of Fame.”

I was, of course, stunned.

In my unremarkable life, the possibility I could be ensconced in the Cravers Hall of Fame, honoring the most ardent fans of my favorite little cheeseburgers, had never crossed my mind. Now I could picture myself, a new inductee, walking the runway with my sash slung over my shoulder, tears welling in my eyes as the orchestra played, “Here He Comes, Mister Slider.” And given today’s prevailing winds of modesty in the pageant world, I could probably get by with wearing loose Bermuda shorts instead of Speedos with a strategically placed pair of socks packed inside.

Meanwhile, the fellow nominees I’d beaten would beam and clap enthusiastically for me and my good fortune, all the while thinking, “We hope you choke to death on a Chicken Nibbler.”

Yes, it would be sweet.

But I wondered, what kind of folks were already in White Castle’s Cravers Hall of Fame? Whose butts would I have to whoop to make the Class of 2018 inductees? Hopefully a bunch of losers with no business being nominated in the first place, right?

Looking up past classes on the Internet, I gulped. One member was Richard Dreyfuss, for crying out loud. That’s right, the star of “American Graffiti,” plus pretty much my absolute favorite movie of all time, “Jaws.”

Alice Cooper. Yeah, thatAlice Cooper. The rock star and deejay who occasionally looks like a weirdo, but seems a perfectly nice guy and in no way a dingbat. Was he a fellow I could picture myself sharing 20 or 30 sliders with?

Others? John Cho and Kal Penn, if you could believe it, which I couldn’t, since I didn’t know who the hell they were. But it turned out they were the stars of the movie “Harold and Kumar Go to White Castle,” which you had to figure made them Cravers Hall of Fame shoo-ins.

And then there was Telfar, the young, hip clothing designer. You could see where White Castle was heading with this. An inductee like him would establish the fact that sliders were the burger choice of cutting-edge millennials whose pictures usually adorn the pages of Vogue magazine. This was as opposed to slider has-beens like me, whose pictures usually adorn the pages of bowling league  newsletters and catheter ads.

Obviously, I had no chance.

But then I got to wondering, could there possibly be two levels of inductees? Was there the celebrity level for guys like Dreyfus and Cooper, and another level for us commoners? What got me thinking this was a note in a post about Dreyfuss’ induction. It said he would now be hooked up with his special White Castle “hot line,” through which he would be delivered a Crave Case of sliders, anywhereand anytime.

A prize like that? It was died-and-gone-to-heaven stuff, the sort of priceless reward reserved for gold-standard folks who were also winners of Emmys, Grammys, Oscars, and maybe even a couple of Nobel Prizes.

But what about the rest of us pathetic chumps? The guys whose inductions came with, say, coupons for a free slider ten-pack?

You had to figure there’d be a wing in the Hall of Fame reserved for the Craver whose stomach had to be pumped out after downing a record 67 sliders at breakfast. A place to honor the couple who had a White Castle-themed wedding, complete with bridesmaids dressed in cardboard slider sleeves. And how about a place for the parents of triplets, who named their baby boys Cheese Slider and Double Cheese Slider, and their sweet baby girl Cheesecake on a Stick?

There had to be a place for them, too, right?

So I don’t know. Guess I’ll apply. The worst that can happen is I won’t get in.

The best? Maybe one of these days, Dreyfuss, Alice and I will share some sliders in the Cravers Hall of Fame, and won’t that be something?