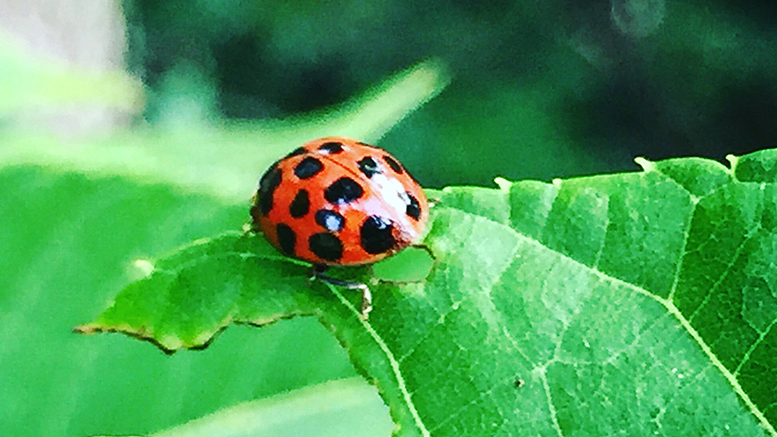 A ladybug doing what it does best—eating. Photo by: Matt Howell

To celebrate Mother’s Day this year, I almost gave my wife Nancy 36,000 presents.

To begin at the beginning, a lawn-care supply catalogue showed up in our mailbox. Flipping through it, I was amazed to see it offered Tree Diapers.

The ad copy assured readers that Tree Diapers helped baby trees get through those rough years of potty-training and on their way to toilet-flushing tree adulthood with a minimum of mess, stress and, presumably, slime. That was fine with me, of course. But as a member-in-good-standing of the AARP Generation, I hoped the tree elder-care professionals would keep the needs of aged trees in mind, too, and begin marketing Tree Depends.

Get it? Tree Depends! The old-tree undergarments? You know, like, a secure place for elderly trees to drop their nuts!

The thing is, once I discovered there were actually diapers made for trees out there, I figured this lawn-care catalogue must have lots of other potential Mother’s Day gifts you could barely imagine, and I was right!

There was a machete I thought Nancy might like. This was not because she needed one. It was  because carrying a machete, she would look way more intimidating driving our lawn tractor around the yard, herding me back into the house on mornings I accidentally stumbled outside wearing my tighty-whities.

There were multiple sets of pruning loppers, too, though it beats me why anyone needs a special tool to lop prunes. Actually, it also beats me what prune lopping is, but so what? Nancy does everything else to the very best of her ability, so I’m pretty sure she has the makings of a butt-kicking prune-lopper if anyone does.

Also, there was a nifty four-gallon backpack sprayer. I think it was supposed to carry four gallons of insecticide, hooked up to a sprayer wand to squirt bugs you wished to murder. But Nancy being personally non-violent, I figured there was a good chance I could get her to fill it with gin-and-tonics to squirt me instead.

But all these gift notions disappeared the moment I spotted the critter page.

Even a non-violent garden person has to do something to confront bad bugs, and it turned out the catalogue offered nematodes! So what the heck were nematodes, I wondered, and soon learned they’re bad bugs’ worst nightmare.

Nancy wouldn’t have to worry about gangs of juvenile bug delinquents rumbling in her garden if I bought her some of these wormy little “double death nematodes.” What’s more, they were priced at a million for under twenty bucks! A million! Of course, then I realized with them being that small, you probably couldn’t even see nematodes with the naked eye.

So technically, I could just tell Nancy I had bought her a million nematodes for Mother’s Day. Maybe I could even find her a mushy greeting card reading “A million nematodes for the world’s best Mom!” then spend that $19.99 on Budweiser and meat snacks for myself.  She’d never know the difference!

But after thinking it over that seemed too low, even for me.

I looked over the “triple threat mite predators” and the caterpillar parasites, too, but somehow they just didn’t have the charm necessary for a Mother’s Day gift.

Then, I spotted them.

Reading their description, you soon concluded that these bugs were no ladies. Stuffing their little faces and making ladybug love was all they did all day. Introduce them to aphids, mealy bugs, leafhoppers or such, and they’d eat them while giving birth to some more ladybugs, which in turn would eat more bugs between their own sexual escapades.

Of course, from the start, I could identify some serious issues. Like, how would I know I wasn’t getting ripped off? Was I supposed to just accept there were 36,000 ladybugs in the box? Or was there a person who actually counted them? And what if that guy was up to 34,951 ladybugs when somebody nearby started singing “100 bottles of beer on the wall” and threw off his count?

Would he start over?

This raised even more questions. What kind of box did they ship 36,000 ladybugs in? And was it possible 36,000 ladybugs were too many for our postage stamp-sized garden? After all, Nancy wouldn’t want a squirming, eight-pound clump of 36,000 starving ladybugs clinging to her lobelias, would she? More to the point, given a shortage of other bugs to eat, would the ladybugs turn mean and start ambushing chipmunks?

Even worse, would they eventually come after us? I mean, when my time comes, I’ve always fantasized that word of  my demise would be the subject of an interesting news story. Still, while a headline reading “36,000 ladybugs eat Muncie homeowner” was bound to get folks’ attention, it sounded kind of icky.

So I gave Nancy the machete instead. She loves it and keeps it with her all the time. Now I’m thinking maybe I should have stuck with ladybugs.