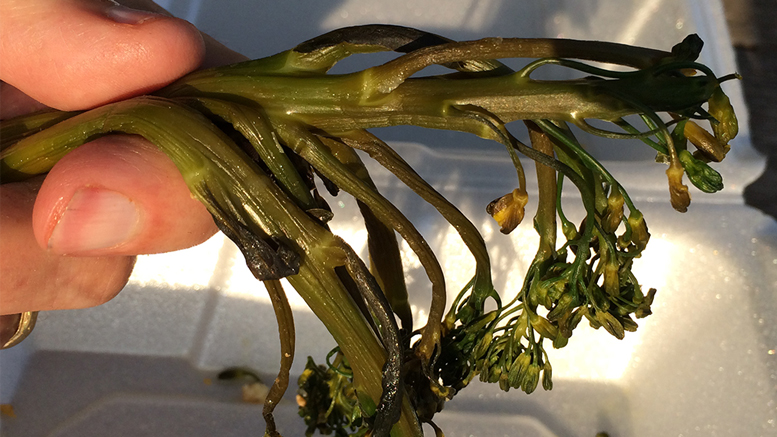 A stalk of broccolini, slightly worse for wear. Photo by: Nancy Carlson

These are exciting days for vegetables.

For example, when Nancy and I recently enjoyed dinner at an out-of-county restaurant, our waitress lowered the plates before us, then began apologizing.

“I’m so sorry, but that green thing isn’t a broccoli stalk like I told you,” she admitted, sheepishly. “It’s broccolini.”

Now, had she failed to mention that, I’d have figured it was simply broccoli that had grown up malnourished in a poor neighborhood, then scooted it to the far side of my dinner plate like always. Green stalky vegetables are a no-no on my Sausage Gravy and Biscuits Diet, as explained in my eventually-to-be-self-published-best-selling cookbook, “Hoosier Grub for Butts of Blub.”

Nevertheless, I was intrigued. What the heck was broccolini?

The waitress explained it was a cross between broccoli and kale, which certainly set my taste buds panting, but that turned out to be wrong.

Determined to find the correct answer, once back home I began my research by Googling “ini” words, and was immediately confronted with zucchini, linguini and bikini. Now we were getting somewhere!

Zucchini? I’d pass, except as a substitute for okra in gumbo.

Bikini immediately made me think of large breasts. By that, of course, I mean the large breasts found on chickens. Nowadays, American diners want chickens with real whoppers, and the chicken industry is delivering them. Translated to human dimensions, most chickens strutting around barnyards these days are sporting a pair of 46 Ds. How can this be? It’s surely the result of genetic modification, in which science has learned to combine chicken breast cells with DNA harvested from the Indianapolis Colts cheerleaders, and possibly even Stormy Daniels.

Unfortunately, further study determined broccolini was not a genetically modified food. So much for that line of inquiry.

Returning undaunted to my research, I encountered a trove of information and finally figured out that broccolini was, instead, a “natural hybrid of broccoli and gai lin, both cultivar groups of Brassica oleracea.”

“Eureka!” I hollered over my culinary discovery. This plain, simple, easily-understood explanation left me only one question to be answered!

But whatever the technical mumbo-jumbo involved in giving the world broccolini, for me the end result was inarguable. Combining broccoli and gai lin left you with a skinny stalk of faux-broccoli that looked up top like it was losing a fight with male-pattern baldness. While I would have gladly eaten it topped with a pound of melted mozzarella and some pepperoni slices, on its own it didn’t look all that appetizing.

This soon brought me back to the crux of my concerns: When are American researchers going to button up their lab coats, stuff some spare ballpoint pens in their pocket protectors and invent truly innovative new foods?

We’re the folks who put man on the moon, right? So does inventing mashed potatoes that cook in their their own savory gravy seem so farfetched?

While they’re working on that, I’d also love to see a hybrid plant combining lima beans, sweet corn and red peppers popping up as far as the eye could see, filling acre after acre with lushly blooming succotash.

And what about bacon-flavored lettuce you could pair with mayonnaise-flavored tomatoes, so all you’d need to make a BLT was bread?

Oh sure, I know there are skeptics out there who doubt these food advancements will ever be realized. But these same doubters didn’t believe Geno’s Pizza Rolls were good for you, either! The truth is, I think it’s possible food scientists are already perfecting these future edibles!

I base this belief mostly on the fact my friend Betty Brewer emailed me to say, “Broccolini has been around for a long time.” OK, Betty being head of Minnetrista, and Minnetrista being where the Farmers Market happens Saturday mornings, I must concede she’s way more versed on cutting-edge vegetable innovations than I am.