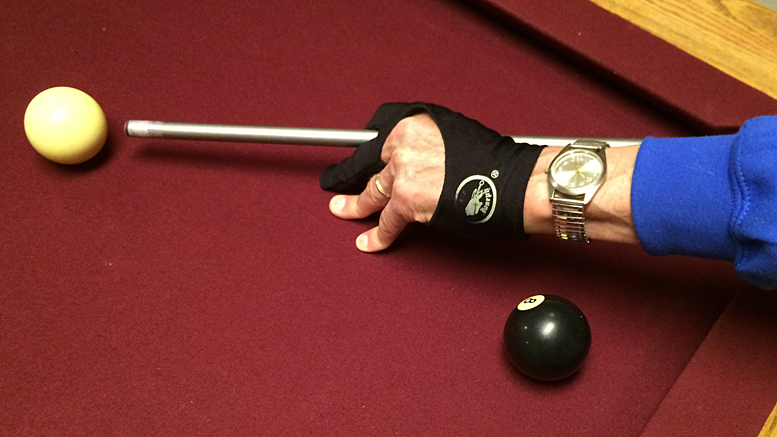 The hardest part of pool is knocking the balls into those holes. Photo by: Nancy Carlson

A friend recently offered me a refresher course on playing pool, but all I needed help with was that part of the game involving hitting a ball with a stick into one of those tiny holes in a felt-covered table.

The rest I had down pat.

Having set foot in a number of saloons over the years, early on I learned to approach pool tables with sad, wizened eyes that seemed to have seen a million shots sunk in a thousand beer joints. Plus, my face was fixed with a nonchalant countenance that hinted, “Yeah, pool is my life.” Sometimes within earshot of other players, I would even mumble words to the effect that folks thereabouts called me “Muncie Fats.”

This lie was a blatant takeoff on the memory of Rudolph “Minnesota Fats” Wanderone Jr., one of the greatest pool players of all time. And truth be told, you could sometimes see the pool players in the room cautiously sizing me up, thinking, a) “Who is this chunkbutt?” and b) “Think he’s as good as he acts like he is?”

But within seconds of me grabbing a pool stick, they knew the answers were, a) “Some dimwit,” and b) “No.”

There were times I’d play all night and never hit a ball. Not even the cue ball. As for my opponents, their biggest challenge wasn’t winning. It was not being speared in their kidneys by my wayward pool stick. Yes, some of my opponents acted all uppity about beating me so handily. But in its own way, it seemed just as impressive to me that I could play for weeks on end without sinking one stinking shot.

In the dives where I hung out, you’d run into all levels of pool players. Some good ones, some not-so-good ones, and some almost-as-bad-as-I-was ones. Almost.

But at some kid’s high school graduation party once, I saw a guy play a game that made my jaw drop. He was our former family attorney, the late Don Chiappeta, and what he did at this party nearly made me choke on my cupcake. He ran a table – one–handed. I had never even envisioned such a thing. With his left hand held behind his back and his pool stick resting on the table’s bumpers, he pocketed every ball without breaking a sweat.

So when I recently went to play pool with my friend Dave Meyer in his daughter and son-in-law’s basement, I had a simple request: Could you teach me to shoot pool like Don Chiapetta? Before that could happen, though, Dave thought I needed some coaching on the basics of the game.

He reminded me, for example, that you always hit the cue ball with the skinny end of the stick, not the fat end. Ha–ha! OK, that’s a joke. I knew which end of the stick you hit the ball with. But until Dave said it, nobody had ever told me that when you break, you hold the stick all the way at the fat end for maximum, concentrated power.

This explained why, on so many occasions, my cue ball had just ricocheted off the racked balls like they were bricks. Do that often enough in a roughneck tavern and you soon developed a reputation where, if somebody bought the house a round of drinks, you were automatically served a Shirley Temple.

And another thing Dave taught me. That stick with the knobby plastic thing stuck on the end? Turns out it’s a “bridge” to facilitate ungainly shots, not a device for pulling bags of Fritos closer.

I also learned there are gloves for pool players now. Back in the old days, some guys I knew even played handball without a glove, but now there are gloves for every conceivable sport. Pretty soon, people will be wearing gloves to play the lottery. So when I saw that Dave wore a glove, I pulled one on, too.

And you know what? I still sucked at pool.

Anyway, one of these days I’ll visit Dave for another lesson or two. Then I’ll go to The Fickle Peach and practice what I have learned for hours on end. After that, who knows? I may actually knock a ball into one of those little holes.

A former longtime feature writer and columnist for The Star Press in Muncie, Indiana, John Carlson is a storyteller with a unflagging appreciation for the wonderful people of East Central Indiana and the tales of their lives, be they funny, poignant, inspirational or all three.