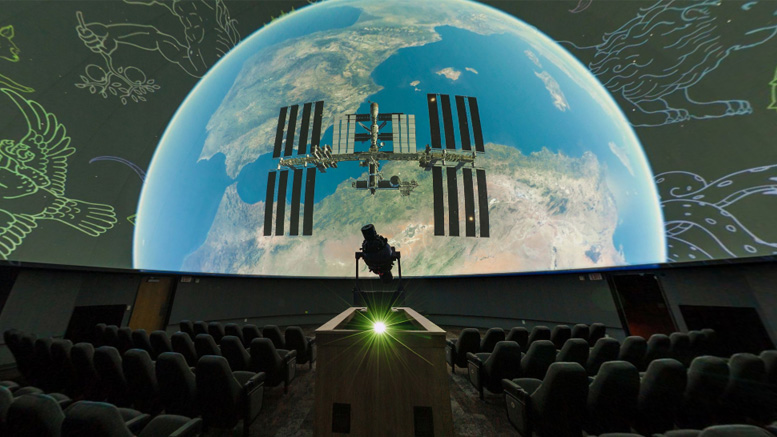 One World, One Sky: Big Bird’s Adventure Produced by the Adler Planetarium

One World, One Sky is a brilliant spectacle of light and color that follows Sesame Street’s Big Bird and Elmo as they explore the night sky with Hu Hu Zhu, a new friend from China. Together, they take an imaginary trip from Sesame Street to the moon, where they discover how different it is from Earth. They will also find shapes in the sky that will help them find the North Star. This cross-cultural adventure opens children’s eyes to the sky, helping them see how people all over the world are connected. Best suited for PreK-2nd graders.

Take a journey through our solar system and explore the remarkable diversity of moons! From volcanoes and geysers to ice-covered oceans and methane rain, these natural satellites have some spectacular features, and many even exert a surprising influence on their planetary partners. Learn what these celestial bodies reveal about the history and workings of our solar system. Best suited for all ages 8+ Back to the Moon: For Good Produced by Google Fridays – February 2, 16, 23 @ 6:30 PM

Narrated by Tim Allen, this show chronicles teams around the world competing for the largest incentivized prize in history, by landing a robotic spacecraft on the Moon (something has only happened one time in the past 40 years). Launches for this project are scheduled for early 2018! Who will win the 30 million dollar prize? After 40 years since manned missions to the moon, the race is heating up once again, get in on the action! Best suited for all ages 8+

Planetarium Director, Dr. Ron Kaitchuck, will review and explain some of the most exciting and surprising astronomical discoveries in this live presentation. These include findings from space probes at Jupiter and Saturn, the first images of the surface of the giant star Antares, and a star in another galaxy that disappeared from view – possibly becoming a black hole. Also, scientists accomplished what Einstein thought to be impossible; they detected gravitational waves, a distortion of space and time as predicted by the General Theory of Relativity. Come and learn about all these things and more during this presentation in the planetarium. Best suited for all ages 12+

This program explores a timeless question: Do other planets like Earth exist? Within the past 20 years, astronomers have discovered thousands of planets orbiting other stars. Travel to distant stars and fly up to exotic planets and see them up close in the planetarium. Experience the science shifting our perspectives on humanity’s place in the cosmos. Best suited for all ages 8+