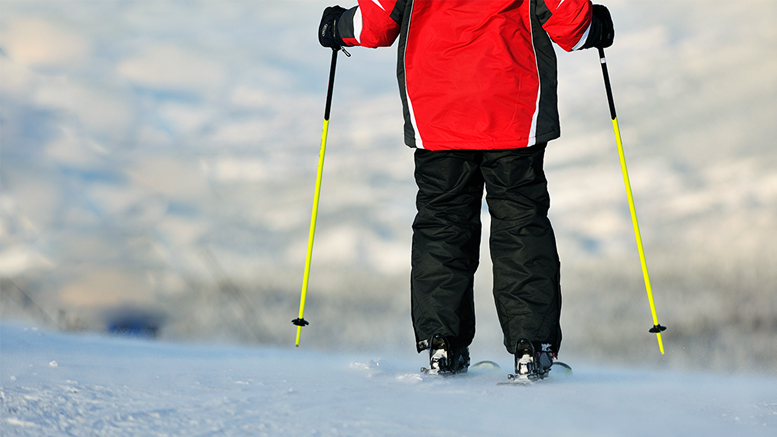 Cross-country skiing is very good for you, supposedly. By: graphicstock

The other day I was nursing a beer at The Fickle  Peach while watching a preliminary Winter Olympics qualifying event for the biathlon.

You know the biathlon, right?

It’s the event that combines cross-country skiing with shooting. The contestants scoot long distances over the snow with rifles slung from their shoulders. Upon reaching a series of targets, they stop skiing, aim their rifles and try to shoot bullseyes.

I have never competed in a biathlon, but I did own a pair of cross-country skis once. Having read something touting the health benefits of using them, I recall wandering into a sporting goods store years ago with a credit card, a bellyful of schnapps and some unrealistic expectations. I wandered back out a couple minutes later with two sets of skis, one for Nancy and one for me.

This gift was anticlimactic for my wife. Something of a natural athlete, she had skied down mountains in places like Colorado’s Steamboat Springs, where her sister Margi lives.

Me? I hadn’t. Launch me down a mountain ski slope with one lonely tree sticking from it somewhere and there was a 99 percent chance I’d pull a Sonny Bono. So never having skied before, I took a good solid seven or eight minutes to familiarize myself with mine. This mostly involved inching my way up and down the crusted snow on our driveway, bug-eyed and hollering “Whoa!” whenever I landed on my butt, which was about a hundred times. Taking a sideways glance at my reflection in our storm door to check how awesome I looked, my gaze was returned by Elmer Fudd, madly windmilling his ski poles as if fighting off an imaginary attack of snowy owls.

Nevertheless, awakening the next morning to several inches of new-fallen snow, I set off across it to buy my Sunday New York Times and some smokes.

Had I realized way back then what I noted just the other day at The Peach, my trip to the grocery store would have gone better. While some of the Olympic biathlon hopefuls may have been Sunday newspaper readers, not a single one was skiing along while puffing on a Marlboro.

Back then I, on the other hand, was. As a result, two-hundred yards into my epic winter journey and still four whole blocks away from the supermarket, I thought I was gonna die. Anxious to make a sale, that godless nitwit of a salesman at the sporting goods store had vastly underplayed just how hard cross-country skiing was. Gasping and hacking with a sheen of running nose gunk turning my mustache into a hairy icicle, I knew that had I been able to draw a bead on him, I’d at least have winged that salesman in the keister.

Just like with the cigarettes, I now see a big difference between the way I was back then and those biathletes I saw on TV at The Peach the other day. You could tell none of them had ever eaten a Krispy Kreme doughnut in his whole, miserable, frostbitten life. In fact, they looked like they’d never seen a Krispy Kreme doughnut. Tall, skinny, lanky dudes. That’s what they were.

As a short, chunky dude with a smoking habit, by the time I got to my supermarket I was a mess, and ended up sitting outside in the snow for a half-hour to cool off. But when I did venture inside carrying my skis and all, you could tell by the way people stared they were impressed to see a real cross-country skier in their midst. Either that, or they were keeping a close eye on the apparent nutcase who was stumbling around babbling about snowdrifts.

Waddling through the checkout line, I could barely carry my skis, ski poles, newspaper, Marlboros and Krispy Kremes. And yet, I looked like the picture of athletic grace compared to how I looked heading home on skis with my loot. Every few feet I desperately slapped at my ski pants for my cigarette lighter. Sections kept tumbling out of my New York Times and into the snow. With my Krispy Kremes stuffed inside my parka, I took a full-frontal fall, and now my doughnuts looked more like crepes.

As near as I can remember, the quarter-mile home took about an hour, perhaps the longest hour of my life, with much of that time spent sliding through the snow on my tush.

“How’d it go?” Nancy asked when I finally got home.

The next, and last, time I saw my skis was during our spring garage sale.