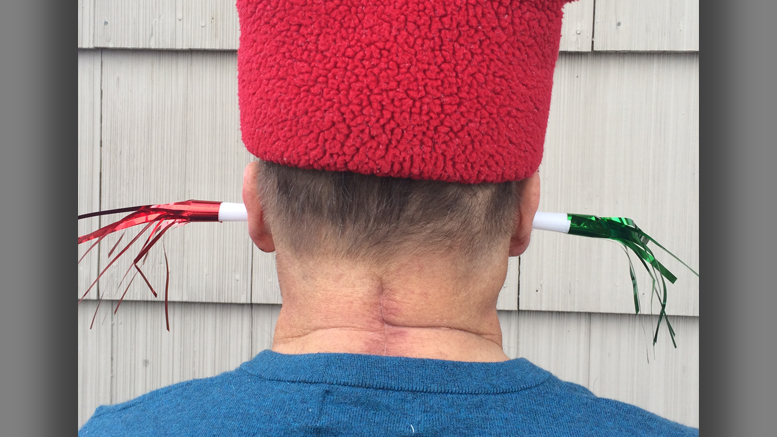 Squawkers in your ears meant the party was a good one. Photo by: Nancy Carlson

Come Sunday, like millions of other American geezers, Nancy and I will be celebrating a traditional New Year’s Eve for Oldsters.

It wasn’t that long ago we would gather with our wild and crazy friends to ring in the New Year with peels of raucous laughter, spicy meat snacks and booze. Well, okay. Nancy would ring in the New Year with half a glass of white wine and a handful of Chex-Mix. I’d be the one whooping it up in a champagne-vodka-Budweiser haze before collapsing on somebody’s couch, recliner or toilet seat. At the same time, my mouth would be bordered by crusted barbecue sauce from the hundred cocktail wieners I had snarfed, while “festive fringed party squawkers” poked like shiny antlers from my ears.

Was I really so stupid, so ignorant, so much of an utter knucklehead, as to think that sort of behavior was fun?

In fact, should reincarnation turn out to be a thing, I wouldn’t mind taking another crack at those good times in my next life, assuming I come back as a typical dude and not a hamster or similar rodent. But five or six years ago, I inexplicably began experiencing that eight-letter condition which eventually sobers up even the craziest among us.

Okay, I am aware of what you sharper readers are saying right now. “Sleepiness has three S’s in it, not one, you moron! You intentionally left off the last two S’s to get down to the eight-letter condition you specified three sentences earlier, starting with, ‘But five or six years ago …’!”

True, but I was simply making a point. See, young America, when you get to this sad station in life, it doesn’t take anything to put us geezers to sleep. Speaking. Eating. Typing a column. Even unconsciously pursuing bad habits. Like, I wish I had a dime for every time I’ve woken up wondering, “Hey! Who’s the joker who stuffed a bunch of bitten off fingernails in my mouth?”

When you hit this stage, you start thinking that the place to be New Year’s Eve is back home, where you can fall right into bed once midnight strikes without breaking a hip. Then after maybe a year or two, you start telling yourself that, you know what? Chances are pretty good that New Year is going to arrive whether you are around to greet it or not, so why not just go to sleep?

There are, I have discovered, obvious benefits to this.

First, you’ll wake up fresh and rested in the morning, ready to tackle whatever challenge the dawn of the New Year throws at you, like pulling up your pants.

And except in rare instances, retiring early negates the chances you are going to be injured in a New Year’s Eve car crash. That’s presuming some ignorant idiot like you used to be doesn’t run his SUV through your bedroom wall. Either that, or you don’t foolishly make a daring dash to the pizza parlor, then crash into a tree on your way home in the throes of an extra-cheese-and-pepperoni stupor.

Even more to the point, though, going to bed at a reasonable hour on New Year’s Eve will save you from the emotional damage of geezerhood, which far exceeds the physical damage. Believe me, the last thing we geezers need is to be watching New Year’s Eve television when the young stars start hopping around on stage and you don’t know a single danged one of them.

I mean, nothing is more pathetic than sitting there alongside your wife yelling, “Tarnation!!! When are The Kinks gonna play?!! Where’s Herman’s Hermits?!! Hit the clicker, woman, I gotta find Gerry and The Pacemakers!!! And when’s Dick Clark gonna bring out The Shangri-Las, dadgummit? I wanna hear ‘Leader of the Pack’!!!”

Yeah, that kind of disconnection truly sucks, but don’t take too much joy in our decrepit state of geezerness, youngsters.

Your turn is coming.