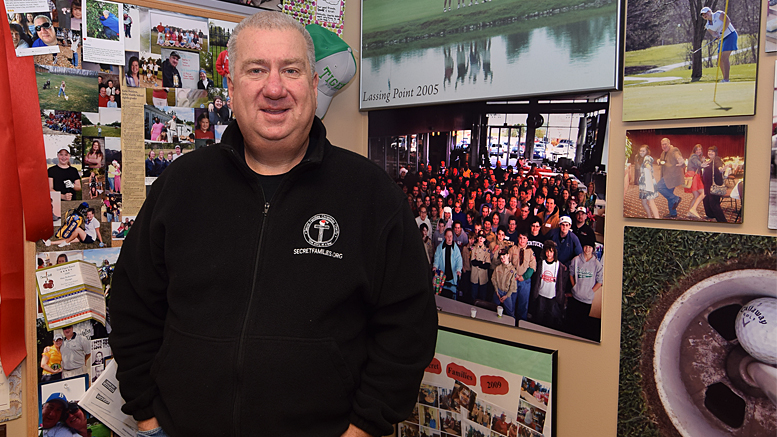 Al Holdren is pictured in his office standing beside hundreds of photos of thousands of volunteers who participate in "Secret Families." Photo by: Mike Rhodes

With Christmas rapidly approaching, I feel compelled to offer a belated but heartfelt “thank you” to Al Holdren and the scores of Secret Families volunteers, folks who selflessly give of their time and money to make this holiday a great one for others.

The breadth of their effort to help the less fortunate is amazing, and humbling.

I would suppose other communities share similar programs, but I don’t know. It may well be that Holdren’s uncommon effort exceeds what you will find in similar-sized cities. Being such an obvious example of Christmas and Christian love in action, it wouldn’t surprise me to learn his program was unique in its scope. What’s more, his effort is just one of many in Muncie.

When I was a kid, I witnessed something of Christmas poverty, though I never experienced it myself. On our block, my Dad was a definite up-and-comer.

Just north of our city was Lorain, Ohio. A grimy, working-class town on the south shore of Lake Erie, it boasted a shipbuilding yard and Republic Steel. A mile-long fortress of belching smoke and molten fire that painted the night sky orange, the steel mill also birthed many rowdy bars across the street. This mill was where my grandfather forged an immigrant’s rough and tumble career, even back when the Great Depression limited his work to a day a week. My Dad would likely have spent his own work life there, as well, had World War ll not intervened.

Like countless other veterans, when the war ended, his pain, blood and sacrifice were traded for the American promise inherent in the GI Bill. It enabled him to earn bachelor’s and master’s degrees in chemistry and math. A brilliant man, he was going for his PhD and the dream of a professorship when yours truly came squirming, burping and squalling along, launching him into a lifetime of process engineering as a General Motors chemist.

This was a darned good job for a bright young man with a limitless capacity for work. One day he spent the magnificent sum of 50 bucks to buy a beat-up black 1950 Chevy to drive to the plant and back, so Mom could haul us kids around in the family Pontiac. With that we became one of the first two-car families on our end of Pasadena Avenue. Such opulence was almost unheard of on our block before that time.

While two cars marked us as people of material substance, folks just a few houses down weren’t so lucky. Their house was the same sized little veteran’s cracker box as ours, but was rundown and sparsely furnished. I can still recall the winter’s night Dad, my sister Patty and I pushed pieces of our old furniture down there on sleds to make their place a little more habitable. If those neighbors’ kids, who were our age, resented this charity, it wasn’t obvious.

The look in their mother’s eyes, though, mixed a measure of gratitude with resignation at what life had dealt them, had dealt her. It was as obvious as the crimson hue of her nose, evidence of the alcoholism that fueled her resentment, anger and hopelessness.

Even as children, my sister and I could figure it wasn’t going to be much of a Christmas for that lady’s kids.

I also remember fifth grade, when my teacher, Mrs. Dumont, welcomed us back from Christmas vacation. Now, I must say, she and I had a special bond. She loved me and I loved her, at least as much as a kid could reasonably love a teacher. Seated at a desk beside me, meanwhile, was a boy named Eddie, a kid in worn corduroys and threadbare shirts who was as quiet, unassuming and nice a youngster as you’d ever want to meet. In short order, we became friends.

But this day, as Mrs. Dumont worked her way around the room asking what our favorite Christmas gifts had been, I could sense Eddie’s discomfort.

When it was his turn to talk, he softly answered, “I didn’t get anything.”

Slightly flustered, Mrs. Dumont smiled and said, “Well, surely you got something.”

No, Eddie said. Nothing.

“But you must have gotten at least a shirt,” Mrs. Dumont insisted, her voice starting to rise. But Eddie shook his head, no. And now, with all the kids in the classroom looking on, she pressed him further, with a hint of agitation in her voice. “Not even any underwear?”

With that, Eddie was finished. Nodding his head yes, he looked away as Mrs. Dumont smiled again, having convinced herself that all her students received something for Christmas, even if it wasn’t true. Not long after that Eddie left school, never to be seen by me again.

That poor kid often enters my mind at Christmastime, as does the family who gathered in their doorway to accept our used couch and chairs. I also ponder the memory of my Dad, sitting wordlessly with a depressed, reflective look beside our brightly lit tree that Christmas morning. As Patty and I opened gifts, he explained to my Mom that he couldn’t get his mind off the folks down the street.

But this time of year, we can also think about the promise of Christmas, those earthbound angels like Al Holdren and the people who help him, and the folks supporting other loving causes. Our city is so very blessed to have them.