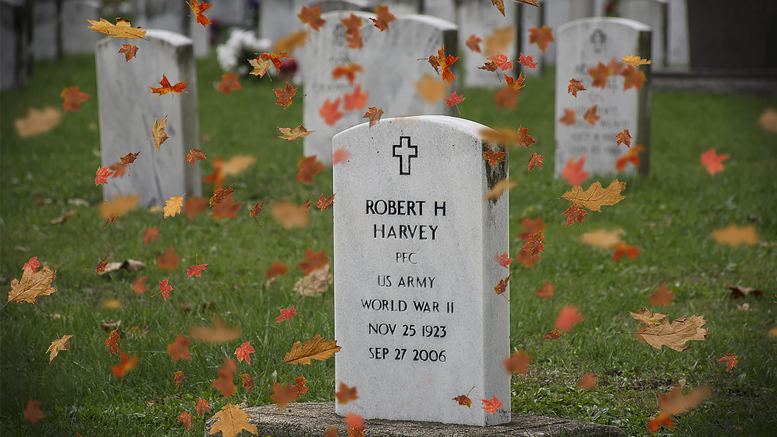 Do you believe in ghosts?

Maybe not the malevolent kind who supposedly haunt your house or your life, though I believe the occasional good scare is beneficial to one’s constitution. But there’s another kind of ghost, a far more positive kind …

When it comes to getting in touch with them, November helps. It’s easier to feel them in the wet chill of mid-autumn, with a predominantly gray sky blocking the sunshine and the last vestiges of Halloween still visible in the rearview mirror. The sad whistle of a faraway train helps, too. And they’re  particularly easy to believe in when you’re slowly cruising around Beech Grove Cemetery, which I do on occasion, it being a place I love.

The ghostly presence most keenly felt, especially on the cusp of Veteran’s Day, is of America’s military men and women buried there. There are many, many of them, some scattered about the cemetery outside the ranks of headstones that commonly denote a veteran’s grave.

My wife Nancy and I own plots there on a west-end hill. At the foot of that hill, an unobtrusive stone of pink marble etched with wings marks the grave of a young flier, a 28-year-old lieutenant killed during World War II in the crash of his B-25 Mitchell bomber. Was it a weather-related crash? Was a mechanical failure to blame? Was he one of the thousands of young airmen shot down in combat?

I don’t know. But under any circumstances, he gave his life for his country and therefore holds a special status in my eyes and heart. Standing by his marker, it’s possible to feel something of his youthful spirit.

With so many other markers there, finding an intriguing one you’ve encountered in previous visits can be a challenge. But I know of another young man’s marker, a somewhat ornate one. He’s not buried beneath it, though, and with good reason. A new graduate of the United States Naval Academy at Annapolis, he was lost shortly thereafter during World War II when his ship was sunk in the North Atlantic. Lacking his body, it seems reasonable to believe that something of his spirit sparks the atmosphere near this tribute to his life and ultimate sacrifice.

Slowly drive past the military markers just west of Beech Grove’s underpass and you get the same feeling. Uniformly white, the markers stand in stark contrast to the American and POW-MIA flags that fly over them. Based on my observation, the vast majority of those buried beneath them died long after their service to their country ended. Still, it’s not hard to think the rows reflect vestiges of the hopes and dreams of those one-time soldiers, sailors, airmen and Marines, young and old, and memories of the ones who loved them.

Among that last group, one never fails to bring me to a stop. I clearly remember, as a young reporter, taking notes as this young former Marine sergeant, a veteran of the Vietnam war, was sworn into the Muncie Police Department. Recipient of a Purple Heart, he later dealt with tough issues I couldn’t fully understand, never having experienced them myself. What  I do know is, I’ve driven past his grave for many years now, and often wonder if anyone ever thanked him for his service.

Anyway, it’s not far fetched to me to picture our veterans, both present ones and those lost to time, as a silent line of brave men and women stretching from the birth of our nation to present. Do I think that, in some way, they are something more than the rest of us, a little more worthy of our country than the rest of us?

What’s more, every single day that silent line of theirs stretches farther.

At Beech Grove, a Revolutionary War soldier or two is numbered among them, as are veterans from World War I, Korea and other conflicts. Then there are  the Civil War veterans in the plot facing Kilgore Avenue just west of the main entrance. In Delaware County’s burial place for the Grand Army of the Republic, 55 of its dead were members of the 121st Regiment of the 9th Cavalry, being sent home from Confederate prison camps on April 27, 1865. When three of the steamship Sultana’s four boilers exploded as it plied the Mississippi seven miles north of Memphis, 1,192 on board died. If you didn’t know about this almost unimaginable tragedy, neither did many other folks at the time, overshadowed as it was by the assassination of President Abraham Lincoln the day before.

Their deaths seem excruciatingly, sadly poignant to me, blending the heroic image of horse-mounted troops contrasting so with hungry, sick and weary prisoners-of-war about to know the joy of returning home before the worst sort of fate befell them.

But of course, all deaths are sad. With veterans, though, at some point in their lives, they selflessly gave themselves to a higher calling and “signed on the dotted line,” to the ultimate benefit of the rest of us.

Given that, it behooves us all to thank a veteran for their service today.

Wish I could thank my Dad for his service tomorrow, but he died shortly after Veterans Day a year ago. Now, I feel, he’s standing in that silent line, too. 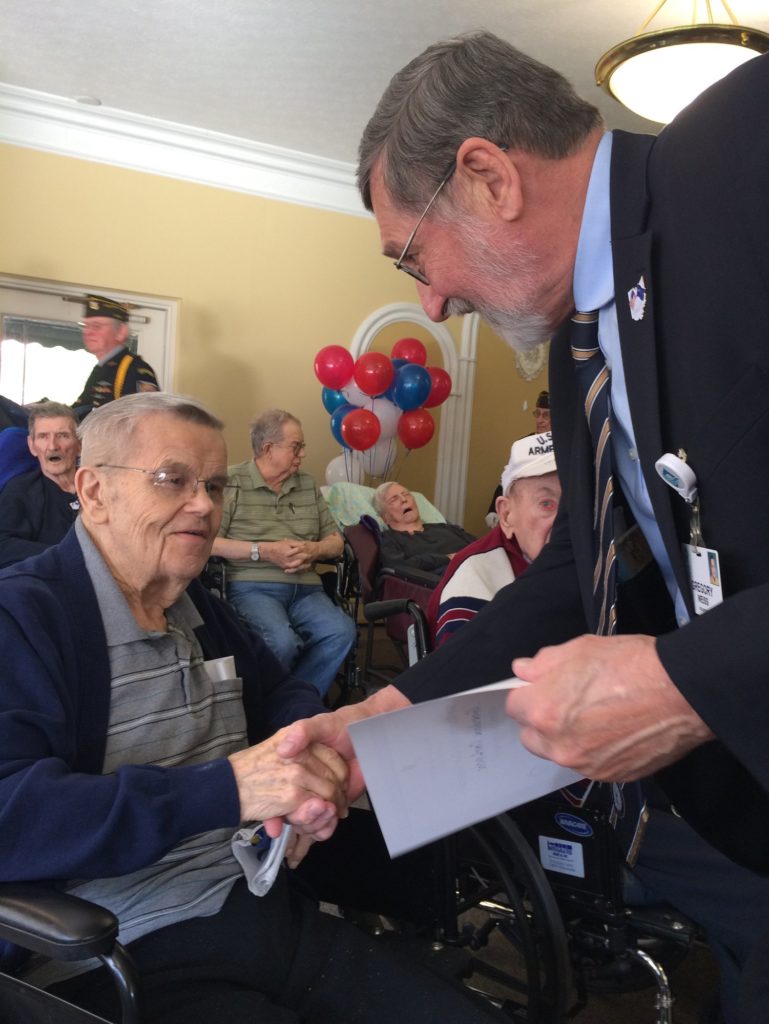 Gordon Carlson was among veterans honored just days before he died. Photo by: Nancy Carlson