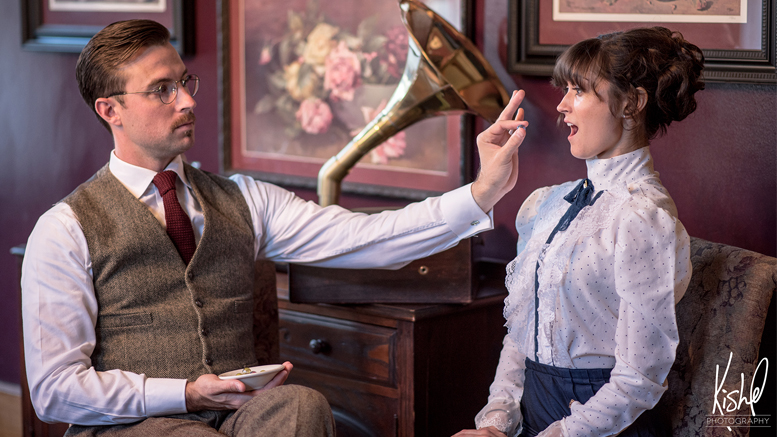 A scene from Muncie Civic Theater's presentation of the musical “My Fair Lady." Photo by: Kishel Photography

Muncie, IN —It is sure to be a “loverly” evening.

Based on George Bernard Shaw’s classic play “Pygmalion,” “My Fair Lady” tells the familiar story of Eliza Doolittle, a flower peddler with an unmistakable Cockney accent who agrees to take speech lessons from Henry Higgins, who has made a wager with a colleague that he can transform her from a “gutter snipe” to a duchess in just 6 months.

And while Muncie Civic undergoes its dramatic building transformation as part of its Uphold Civic efforts, Eliza will undergo her transformation on stage at Northside Middle School. Northside (and Muncie Community Schools) is one of many community partners who have opened their doors – and their stages – to Muncie Civic Theatre during building renovations. Through this partnership every Northside student is eligible for a complimentary ticket to see the show.

The alternate location for this production has not been without its challenges, as every off-site production is bound to be, according to director Dr. Michael O’Hara, “but stalwart efforts have shaped a show we are very proud of.”

O’Hara, Associate Dean of the College of Fine Arts and Sursa Distinguished Professor of Fine Arts at Ball State University, said he has “been blessed with a true town and gown cast and crew” for this production.

“Of the 40 plus people involved in the show, only six people are Ball State students,” he said. “I’m always in awe of what people are willing to sacrifice in order to share great works of art with their community, and I’m grateful to be a part of it.”

It has been called the world’s most perfect musical, and not just by O’Hara himself.

The musical features a beloved score, including “Wouldn’t It Be Loverly?,” “With a Little Bit of Luck,” “The Rain in Spain,” “I Could Have Danced All Night,” “On the Street Where You Live,” “Get Me to the Church on Time” and “I’ve Grown Accustomed to Her Face.” Dr. Michael Williamson is the musical director for this production.

“I think that everyone who comes to see this show will fall in love,” said Priscilla Ervin, choreographer for the show. “I, quite honestly, had forgotten how much I love this show until we began rehearsing.”

Ervin said that when she began to create the choreography for the show, she wanted to make sure it helped “set the tone and tell this story.”

She was also inspired by the cast members, which range in age from 13 to 90. “I waited until we had auditioned and began rehearsing to start choreographing the show,” she said. “I spent the first few days observing and watching the cast develop their roles. Helping them be able to physically settle into their roles and add movement is when things really begin to come to life.”

She described the cast as “extraordinary.”

“For most of them, the material I gave them was not second nature but we’ve done a lot of rehearsing and they have absolutely risen to the challenge,” she said.