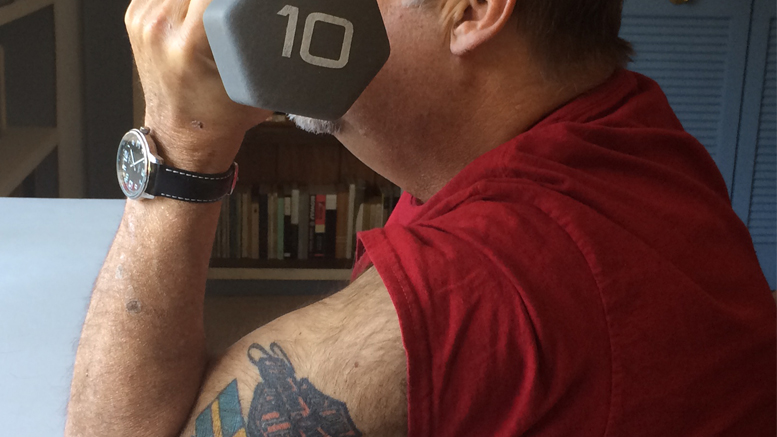 I am a weightlifter.

Literally. By this, I mean I lift a single weight. One. Eins. Uno.

This lonely barbell came into my possession Christmas morning, courtesy of my wife, Nan. But while it is only a 10-pounder, it was far and away my biggest gift, both in terms of weight and life-changing potential.

Along with a certain book of poetry, I asked for this barbell, which means I am getting old. Were I younger and more robust, I would have wanted the whole Charles Atlas Superpower get-up.

Indeed, there was a time when I had a nicely padded weightlifting bench down in my basement. There were also enough weights down there that – under the right, or wrong, circumstances – I could have thrown out my back, flattened my foot or popped myself a brand new hernia. That’s why, to be on the safe side, I usually spent hours down there just looking at them.

Anyway, as I entered my 60s these weights were gathering dust, so I parted with them. Lately, though, the desire for a barbell began nagging at me.

See, as a guy who’s spent the last 41 years typing for a living, I never got much of an on-the-job workout. Oh sure, I’d occasionally carry five or six Bic ballpoint pens from the newspaper’s supply closet to my cubicle without assistance. Other times, I was known to rip open packs of Post-it notes with my bare hands. But driving around town, I’d see guys digging dirt, pouring concrete or jack-hammering holes in streets, and envy them their physicality. Sitting in The Fickle Peach with my buddies after work, nursing some beers, I’d feel compelled to fib about how rough I had it.

“Whew!” I’d complain, pretending to massage the tips of my aching fingers while faking a wince. “I must’ve typed a thousand vowels today!”

To humor me, my closest friends would say things like, “Ooh, the poor baby.”

“Yeah,” I’d continue, encouraged by their sympathetic response. “And you wouldn’t believe the consonants I nailed!”

But eventually I got to thinking how, in between sentences, I was wasting valuable time I could spend building up my arm muscles, which over my first two years of retirement had atrophied into something akin to human rubber bands.

Tell you what. A man knows he’s way too weak when on New Year’s Eve, his top resolution is to open a pickle jar all by himself sometime within the year. Heck, Grandma Moses could have whupped me at arm wrestling.

So now, here at my writing desk, I am getting my biceps back up to snuff, giving my barbell a pump or two in the sometimes lengthy pauses between sentences.

That’s not to say I have unreasonable expectations of what’s possible. Given my barbell’s scant weight, I’m not kidding myself. Tough guys like Billy Jack, Rambo and Dirty Harry Callahan? They probably curl 100-pound barbells while using the bathroom in the morning just to help pass the time, among other things.

Realistically, therefore, I know that even after religiously pumping my wimpy little barbell, if Nan and I are on a beach this summer and some musclebound bully kicks sand in my face, I’m going to jump to my feet and holler, “Hey!”

Then I’m going to say, “Wanna borrow our floatees and some sunscreen?”

Nevertheless, I can already feel a surge in self-confidence since Christmas morning. That’s when my gray “Daily Burn” barbell from Walmart fell out of Nan’s hands, plopping directly onto my jingle bells, which hurt like heck. But when I flex my arms now, my biceps feel bigger, harder. In fact, I’m already practicing walking in that ape-like, arm-bowed, musclebound fashion, and learning to speak weightlifter, like, “Yo! Wanna see my squats?’

Once I work up to a couple hundred 10-pound reps with each arm every day, I figure it’ll be time to buy a 20-pounder. After that, who knows? I still don’t suppose I’ll be putting the smack down on beach bullies like Rambo would.

But these days I’m eating pickles with abandon every meal, looking forward to buying that next jar, taking it home from the grocery store and removing its lid with a smug air of self-confidence.