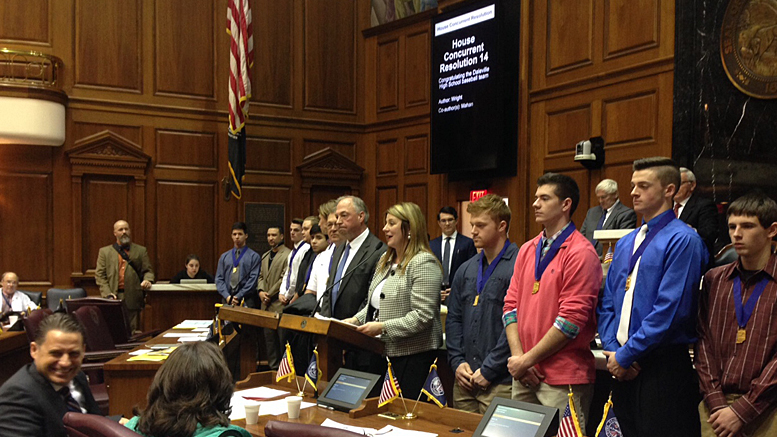 Marlee Hobbs, Mackenzie Riddle and Morgan Riddle are all juniors at Daleville High School and have been performing together since they were in second grade.

In sixth grade the girls arranged their signature version of the national anthem and performed it at a Daleville High School basketball game. This led to them performing at other school functions and sporting events, veterans programs, fairs and fundraisers.

These girls also represented their community when they sang at the Indiana High School Athletic Association’s state championship finals in wrestling, boy’s track and field, as well as baseball and football.

“Not only are these girls amazing singers but accomplished young women,” said Wright. “I believe Marlee, Mackenzie and Morgan can teach us all a lot about friendship, perseverance, and chasing our goals.”

The Daleville baseball team secured the school’s first championship in any sport with a 21-9 record, winning the Class A state title defeating Lanesville 4-0, on June 18, 2016.

“I also want to congratulate the Daleville High School baseball team members for their Class A state championship,” Wright added. “These boys have put in a lot of hard work and dedication; they deserve this.”

Daleville player Brandon Vermillion was named the winner of the L.V. Phillips Mental Attitude Award and is the valedictorian of his class with a 4.32 GPA.