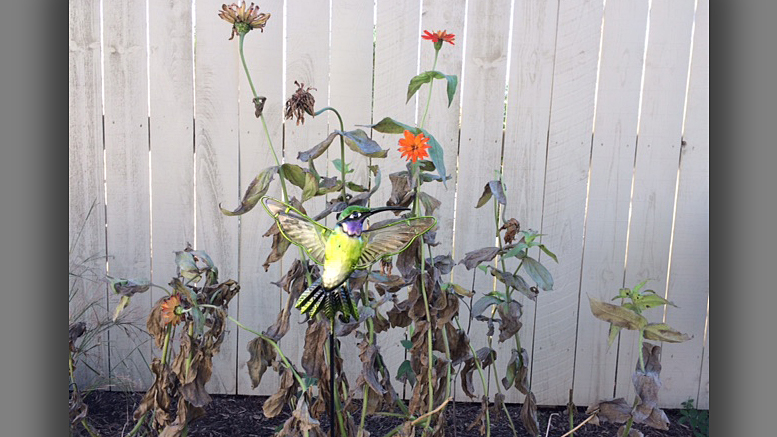 A fake hummingbird flies from some ragged-looking zinnias. Photo by: Nancy Carlson

One thing you don’t consider when you plant a “birds, bees and butterflies” garden as a joyful harbinger of spring and summer is, you’re also planting a sobering harbinger of fall and winter.

This depressing thought struck me the other evening while sitting on my back deck. I was already in a dour mood, having spotted a fat house fly desperately dog-paddling to stay afloat in my wine glass, tainting what I’d just poured from the plastic spigot of a classy box of cabernet sauvignon.

Then I started noticing the changes going on with our plants, some of which were good.

The winterberry bushes had sprouted a beautiful crimson rash of berries. This got me thinking about the inherent beauties of a Hoosier autumn, which I love.

Sure, the leaves are wondrous.

But the wild flowers! Back when I could manage to throw my right leg over the saddle of my Harley-Davidson, I used to spend hours each fall, slowly putt-putting along country roads west of Yorktown. Sometimes, coming upon patches of wild flowers, I’d brake and shake my head in awe, never having seen anything quite so dazzling as those few square yards of naturally painted flatland.

So much for the good, though. In our little garden these days, mostly what you see is evidence of harsh times to come.

Our zinnias, annuals which were boldly colored a month or so ago, have assumed the woeful countenance of abandoned orphans. As for perennials, the brown-eyed Susans grow more heavy-lidded by the day. The butterfly bush looks sad and lonely, too, its flittering namesakes having fluttered far away.

Those gorgeous monarchs, I know for a fact, are vacationing in the Southwest now, more power to them. My wife recently observed thousands – a stunning sight – draped from eucalyptus trees in California, on their merry way to Mexico.

It makes me want to toast them with tequila.

Anyway, most of the color in our backyard garden now is provided by a string of Tibetan prayer flags Nan bought on the West Coast. These flashes of wind-whipped red, white, blue, yellow and green are more commonly strung about base camps by climbers in the Himalayas. If these flags guaranteed good fortune, I’d pray that winter takes it easy on us this year, but I am skeptical. Lots of sherpas seem to die on the job.

In the ice and snow, no less.

The birds, meanwhile, add to my malaise.

In the hummingbirds’ case, it’s by their absence. We relished their abundance this summer, especially after attracting just one the summer before. Now we’re back to one, a great big one, but it’s made of plastic and stuck on a stick near the birdbath.

More ominous are the breathing birds.

There have been crows hanging around the house, for example, with their piercing “caws.” Come a cold and rainy autumn night, these always bring Edgar Allan Poe’s infernal raven to mind, with its dire warning, “Nevermore!” As a Poe fan with a naturally gloomy nature, I always wonder, “Nevermore what?”

If it’s nevermore seeing a politician harping on television, I’m all for that. But if it’s nevermore eating a Mrs. Wick’s Sugar Cream Pie all by myself when my wife isn’t looking?

Then there are the vultures. Their fleshy heads are repulsive, but as a former glider pilot, I have always admired their grace in the sky. The other day, however, three or four of these carrion crunchers, expertly riding the thermals, circled slowly in the air above me, as if waiting for dinner to drop.

Did they know something I didn’t know?

Still, at least the crows and the vultures got me looking up, physically anyway. This particular evening, heading east, some interesting high clouds – cirrus, I guess – floated like accordion keys in measured white ranks, capturing my attention. A faint half-moon, in turn, slowly headed west.

Which reminds me … it’ll be many moons before spring returns, but I’m already counting them down.