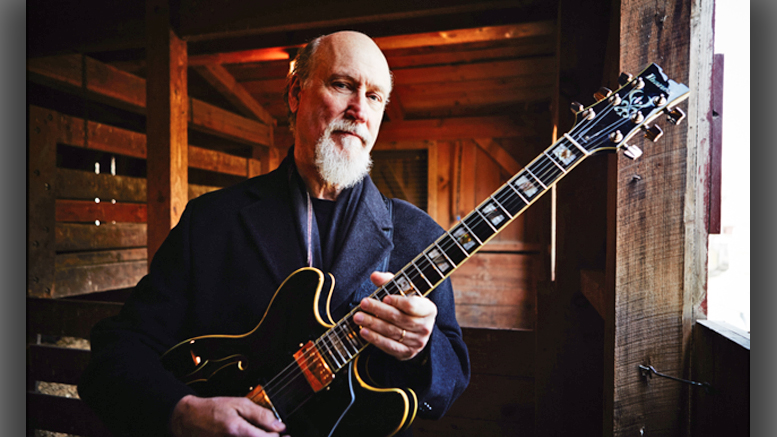 Muncie, Indiana –- September 19, 2016 – 2016 Grammy winner and jazz guitar legend John Scofield will perform in a FREE concert as part of the 2016 Muncie Three Trails Music Series. The concert will take place on Thursday, October 6th at 7:30 PM at Cornerstone Center for the Arts, 520 E. Main St in downtown Muncie, IN as part of the city’s final Artswalk celebration. Ball State University jazz musicians Lamont’s Company will open the show.

John Scofield’s professional career started with touring and recording stints with jazz legends such as Miles Davis, Billy Cobham, Chet Baker, Gerry Mulligan, Charles Mingus, and Gary Burton. Since 1985, he has led his own bands and recorded over 30 albums, with 22 placed in the top ten of the jazz charts and three reaching #1. While Scofield has explored a variety of genres both in and outside of jazz, his latest project and tour draws him into yet another territory, bringing his lifelong love of American Country music out of his toolbox to share with jazz audiences in his “Country for Old Men” project.

Performing with John Medeski, Bill Stewart, and Steve Swallow, Scofield says, “We’re going to turn ‘outlaw’ country tunes into jazz vehicles. Rather than go to Nashville and record with ‘real’ country players in a country style, I’m joining forces with my jazz cronies to play the songs with our jazz approach.” You can count on hearing jazz renditions of classic tunes by George Jones, Hank Williams, Merle Haggard, and Bob Wills  to name just a few!

The Muncie Three Trails Music Series is unique in the state of Indiana as the only annual music series featuring current recording artists of national stature and critical acclaim in FREE public concerts. Other 2016 series artists were bluegrass greats The Grascals, Americana/country/swing artist Pokey Lafarge, and Delta bluesman Tab Benoit. Full information about the series and all 2016 artists can be found at www.munciethreetrails.com.

John Scofield is considered by many to be one of the “Big Three” jazz guitarists of the late 20th and early 21st century (along with Pat Metheny and Bill Frisell). Possessor of a distinctive sound and stylistic diversity, Scofield is a masterful composer and improviser whose music generally falls somewhere between post-bop, fusion, and soul-jazz. Elements of blues, soul, rock and, most recently, Americana are also evident in his many recordings and performances.

Born in Ohio and raised in suburban Connecticut, Scofield took up the guitar at age 11, inspired in the 60’s by rock and blues players. As he puts it, “I think music was actually really important to everybody in that generation. It just was the only thing. If you weren’t a high school football player, you were into music. And it was everything to me.” In the early 70’s, Scofield enrolled in the Berklee College of Music in Boston and soon thereafter recorded his debut with Gerry Mulligan and Chet Baker. He then joined the Billy Cobham-George Duke band. In 1977 he recorded with Charles Mingus and joined the Gary Burton Quartet. He began his international career as a bandleader and recording artist in 1978. From 1982-1985, Scofield toured and recorded with Miles Davis, appearing on Davis’ seminal late-period albums, Star People, You’re Under Arrest, and Decoy. His Davis stint helped place him firmly in the foreground of jazz as both a player and composer. Since that time he has led his own groups, recorded over 30 albums, including 22 placed in the top ten on the jazz charts, with 3 reaching #1. He has won continual plaudits from both Downbeat and JazzTimes magazines, and has engaged in a wide variety of collaborations, including recording and sharing the stage with Pat Metheny, Charlie Haden, Medeski, Martin & Wood, Bill Frisell, Brad Mehldau, Mavis Staples, Joe Lovano, Gov’t Mule, Jack DeJohnette, and Phil Lesh. In 2016, Scofield scored his first Grammy award (after multiple nominations) for Best Jazz Instrumental Album for his 2015 release Past Present.

For his 2016 tour, Scofield brings his lifelong love of American Country music out of his toolbox to the stage for his “Country For Old Men” project, which also sees him performing with some of his closest musical associates from the Jazz community: Steve Swallow (bass), Larry Goldings (keyboards), and Bill Stewart (percussion). In Scofield’s words, “We’re going to turn ‘outlaw’ country tunes into Jazz vehicles… We improvise while keeping the integrity, character and twang of this wonderful American music.” So be prepared for sculpted jazz renditions of classic tunes by George Jones, hank Williams, Merle Haggard, and even Shania Twain, to name just a few.