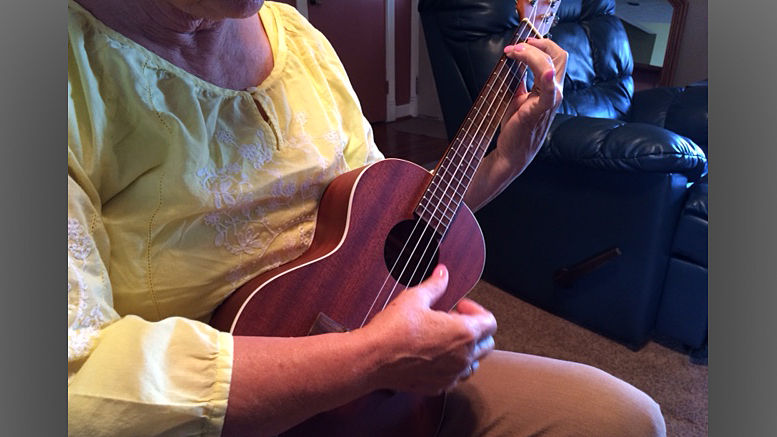 As it turns out, practicing your ukulele helps. Photo by: John Carlson

Let’s face it, if there’s one thing all Americans agree on, it’s that nothing sounds better than ukulele music.

That is total baloney, of course.

If I am representative of Americans everywhere except, maybe, Hawaii – and I think I am – I spent decades avoiding the inept strumming of those insipid little stringed instruments. But then the day came when my wife bought a ukulele for herself, and carried it into the house. Greeting her with the first thing that popped into my head, I said:

So, Nan bought me one, too. That evening, staring side-by-side at our ukuleles, my mind raced with possibilities.

She and I would start a little combo called Nan and the Ukes. No! We’d shorten the name to The Nukes! Plus hire my gal-pals, Jen Merritt and Kelli Jordan, as our chick backup singers, The Nuketones! Next, we’d learn some classic rock songs and inspirational ballads, like The Standells’ “Dirty Water” and Madonna’s “Don’t Cry For Me, Argentina.” Then I’d strap two cymbals between my knees for a rhythm section. Finally, we’d start playing the nursing-home circuit, since the hard-of-hearing residents couldn’t tell how bad we sucked anyhow.

Soon, we’d be rich and famous musicians just like Jennifer Lopez and Puff Daddy, except old and with ukuleles!

But then a weird thing happened. Having hired stringed-instrument guru Gary Andry to teach us to play, Nan began learning some actual chords. The only chords I mastered, however, were weird-sounding ones that I invented myself.

By the third lesson, Gary had identified the problem.

To which I replied, “Practicing?”

That, in a nutshell, explained it. Sometimes for as much as 30 minutes a day, Nan was playing her ukulele the way Gary taught her. I, on the other hand, was spending 30 minutes a day staring past the top of my ukulele into a bag of Fritos, using my salty fingers to practice shoveling them into my mouth.

I should have seen trouble coming.

You see, being a guy who loves music, I had already owned three, or maybe four, acoustic guitars. So on three, or maybe four, occasions, probably after drinking three, or maybe four, too many beers, I had wandered into various music stores, and purchased the guitar destined to launch my musical career. Then I had taken it home, entertaining visions of starstruck women sighing dreamily at the sweet profundity of my romantic lyrics, later throwing themselves at me backstage, along with their underwear and bags of White Castle cheeseburgers.

Six months later, having never touched that guitar, I’d sell it, buy some more Fritos, then start obsessing about getting another one.

The fact is, I knew full well what it would take to learn to play the guitar before I bought my first, having mastered the saxophone as a mere 10-year-old. Filling out one junior-high school questionnaire, I had even listed “wandering saxophone minstrel” as my career goal.

Unfortunately, my lips never worked out that whole singing-while-playing-the-saxophone-thing. But with guitars, I was unable to convince myself that the key to playing was practicing. It was like, if I stared at it long enough, some karmic force would do the trick, but it never did.

Staring at my ukulele now, I’m beginning to think the same thing goes.

Happily, Nan continues to show ukulele potential, and some day may even be headlining with The Nukes at a nursing home near you.

Me? Guess I’ll be the roadie.