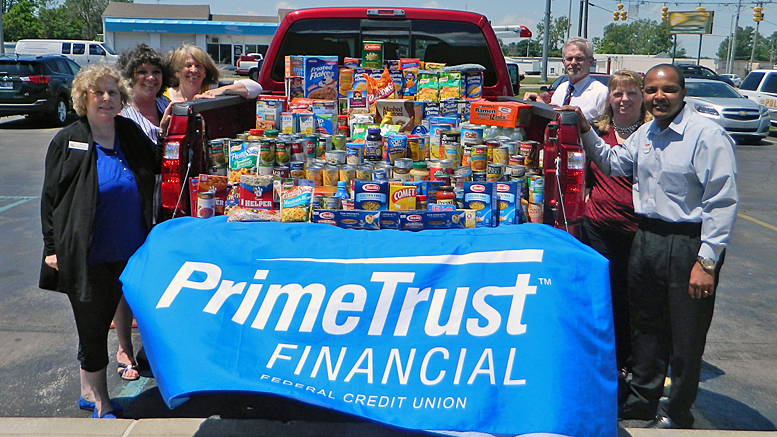 PrimeTrust staff and a representative from Second Harvest Food Bank and Dellen Ford pose with the 651 pounds of food collected during the Fill-A-Truck event sponsored by PrimeTrust during the months of April and May. Photo provided.

The six week campaign was promoted by media sponsor WLBC, a division of Woof Boom Radio Group throughout the month of April and May. Donation boxes were placed at branch locations along with large outdoor banners.  Dellen Ford displayed the F-250 truck at each branch throughout the promotion and WLBC broadcast live from the main branch location on West Bethel on April 30th.

Thanks to the generosity of our members and the community, the FILL A TRUCK promotion was able to raise $181.00 in monetary contributions and 651 pounds of food for Second Harvest Food Bank located in Muncie, Indiana. Second Harvest is a regional partner of the Feeding America national food bank network.

PrimeTrust is headquartered in Delaware County, Indiana which has one of the highest percentages of impoverished residents in East Central Indiana with over 20,500 people living in poverty, based on federal poverty guidelines. Second Harvest distributes nearly 9 million pounds of food annually to an eight county territory.

For more information on Second Harvest go to www.curehunger.com

PrimeTrust Federal Credit Union is the largest credit union in Muncie (and 30th largest in assets in Indiana) and offers a variety of consumer and personal financial products and services. Founded in 1936, as Borg Warner Employees Credit Union, PrimeTrust has three branch locations in Muncie and more than 75 employees.  Credit Union membership is open to all residents of Delaware County, as well as any persons who work, worship or attend school in the County.