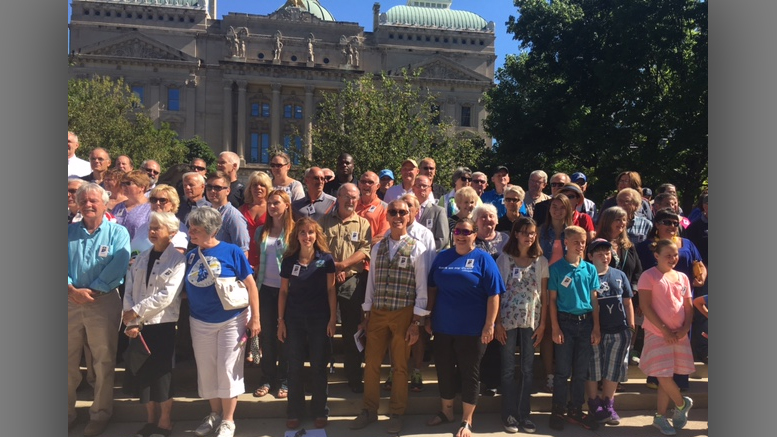 Among Indiana’s torchbearers, Muncie’s Dale Basham, front and center in the vest, represented Delaware County at the Statehouse on Wednesday for the press conference announcing the torchbearers for the 92-county Indiana Bicentennial Torch Relay in September. Photo provided.

Indianapolis, IN— Lt. Governor Eric Holcomb today unveiled the names of more than 2,000 Indiana Bicentennial Torch Relay torchbearers during a press conference at the Indiana Statehouse.

“The 2,000 plus Hoosiers selected as torchbearers embody the Indiana traditions of service, civic pride, community involvement and volunteerism,” said Lt. Governor Holcomb. “As we reflect on Indiana’s first two hundred years, it is only fitting that we celebrate Hoosiers who serve as inspirations in their communities.”

Dale Basham, one of Delaware County’s torchbearers, was at the Statehouse unveiling. “It’s such an honor to me. As I mingled in the crowd today, I saw many Hoosiers who were just as thrilled. I’m sure there was someone from each county represented,” Basham said.  “I’m running every other day to be in good shape.  My brother was in the Olympic torch relay when it passed through Louisville some years ago, and now I am doing something similar.  It’s such a thrill.”

Delaware County will have 24 torchbearers to carry the torch on Tuesday, September 27, 2016, from 9 a.m. to Noon. Then the torch moves on to Randolph County.  Here is the Delaware County list in alphabetical order:

Torchbearers were nominated by the public and selected by local committees on a county-by-county basis. More than 4,000 torchbearer nominations were received. Those selected are Hoosiers who demonstrate exceptional public service, excellence in their profession, acts of heroism or volunteer service to their neighborhood, community, region or state. 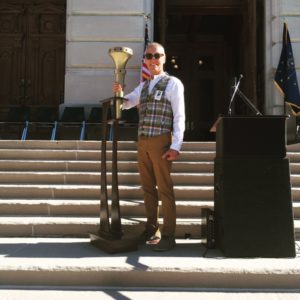 The Relay is patterned after the Olympic Torch Relay and is designed to connect Hoosiers everywhere during the bicentennial year. The unifying nature of the torch relay underscores the achievement, influence and aspirations of Indiana and its people while symbolically passing the torch to future generations of Hoosiers. The torch relay route was charted by a committee of representatives from multiple state agencies and the private sector. The route showcases locations of natural beauty, local interest and historic significance.

The Indiana Bicentennial Torch Relay will start Friday, September 9, 2016 in Corydon, Indiana’s first state capital, and culminate with a celebration on Saturday, October 15, 2016 on the grounds of the Indiana Statehouse in Indianapolis. The torch relay will touch each of Indiana’s 92 counties during the 3,200-mile journey across the state.