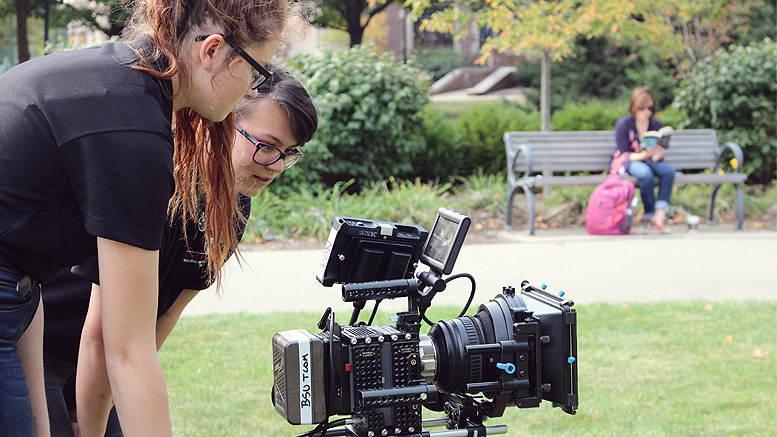 Students monitor a shot during filming of a BSU commercial. Photo by: Sadie Lebo

Days and nights peppered with call sheets, shot sheets and scripts, generous helpings of caffeine, loads of patience, a dollop of good humor and a touch of sleep. Blend all of it together with four groups of students and their faculty advisors, who spent much of the fall semester shooting commercials for Ball State. The results are real-world experiences that benefit everyone involved.

In January, Ball State will begin airing commercials that students produced. The project gave students real-world experience as well as a cost-effective way for the university to market itself.

The idea to create student-produced commercials was first pitched in August 2015 after Tim Pollard, chairman of the Department of Telecommunications, considered all the other work his students were already doing.

Each year groups were traveling around the world for special stories and events, including to the Olympic Games in London and Sochi, Russia, and all of that got Pollard to thinking. The talent was clearly available, and he had no reason to doubt the desire.

Pollard sat down with Julie Hopwood, senior advisor to the president and interim vice president for strategic communications and for enrollment. Hopwood wanted to test the idea of involving students to produce commercials, and Pollard had an idea how to do it, and meet a tight timeline. Eagerness for the project spanned across the campus, from students and faculty to administration and staff. Hopwood was all in. 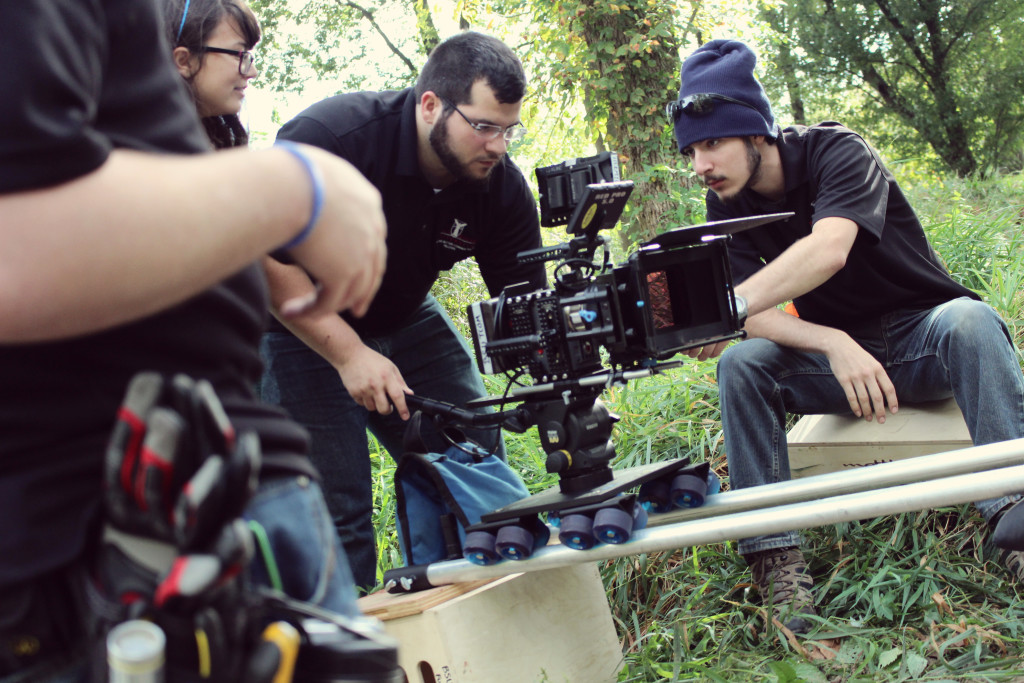 “Ball State obviously gets a product, a very good product,” Hopwood said. “But we also get a sense of community. This was an extremely professional production, and that’s what you get from students in an entrepreneurial environment.”

The student teams created four commercials, each one reflecting a portion of the school’s refreshed vision hinging on student- and community-centered goals as a 21st century public research institution.

After the groups had their directions, Pollard said, the teams were on their own with minimal faculty oversight.

“They wrote the scripts; they were in charge of the entire production,” he said. “The students were responsible for every aspect of the production.”

The responsibility was exhilarating, students said, as well as intimidating.

“What most surprised me was the workload you have to put in before you even go do a shoot,” said Mick Tidrow, a sophomore telecommunications major from Utah. “It was an exciting opportunity. And it’s really helped me decide what I want to do.”

Managing personal and professional commitments, and problem solving on all fronts when the inevitable occurred was part of what senior telecommunications major Sadie Lebo came to love about the project.

“Getting this opportunity, I gained a once-in-a-lifetime experience,” Lebo said. “I feel that I not only grew as a professional but also as a person because I was being pushed to do things I’ve never had to do before.”

Administrators screened the four commercials and gave their feedback, which also gave students insight into the client-relations side of the business. After some tweaks, the commercials were ready for their debut.

“When I saw all of them together for the first time I was astounded,” said Logan Dooley, a senior telecommunications major. “All of this collaborative work—seeing that everybody plays a role and that it makes something so amazing was very cool.

“I hope when people watch these, they see not only what Ball State students are capable of—and the education we’re getting that allows us to make something like this—but also the wide range of things that Ball State has to offer.”

The commercials will begin airing in Indiana in January.

Meanwhile, the nontraditional marketing efforts are getting noticed.

Education Dive, an industry publication, praised Ball State’s initiative saying, “Giving these students professional opportunities on campus is one way higher education institutions can set their graduates up for long-term success. And, of course, with marketing campaigns like this that cost plenty to disseminate, let alone to produce, colleges and universities could save a lot of money by handling production in-house.”

Hopwood said administrators are already looking forward to the next round of productions.

“It was an impressive experience but also a very warm experience. The student-produced commercials exceeded all expectations. We couldn’t be more pleased.”