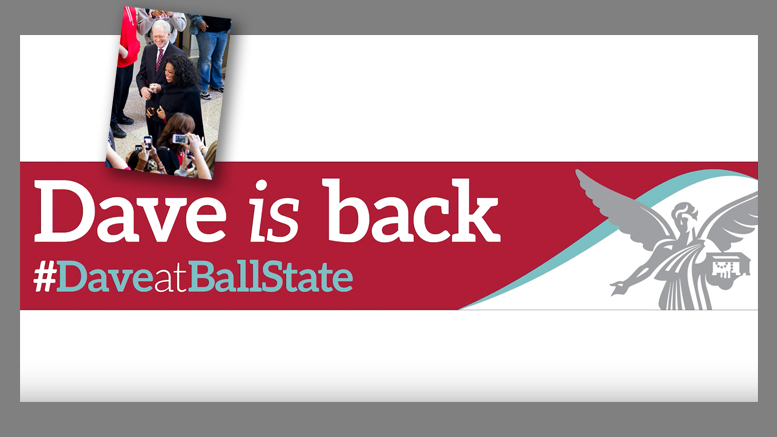 David Letterman, one of Ball State University’s most celebrated graduates, will return to campus Nov. 30 to host a discussion with two of the nation’s top young filmmakers.

Dave at Ball State features Letterman, who recently retired after 33 years of hosting Late Night and Late Show. He will discuss a variety of topics with Spike Jonze and Bennett Miller at 7 p.m. in Emens Auditorium.

Jonze is a critically-acclaimed director, producer, screenwriter and actor whose work includes music videos, commercials, film and television. He won an Academy Award and a Golden Globe for Best Screenplay for the 2013 film “Her,” starring Joaquin Phoenix, a film he also directed. Jonze also directed “Being John Malkovich” in 1999, “Adaptation” in 2002, “Where the Wild Things Are” in 2009.

Jonze is also known for his music video collaborations with Fatboy Slim, Weezer, Beastie Boys, Kayne West and many other top recording acts, and was a co-creator of MTV’s “Jackass.” He currently serves as creative director for Vice Media and Vice’s new TV channel, Viceland, slated to launch in early 2016. Viceland is part owner of Girl Skateboards, a skateboard company.

Over the years, Letterman’s love for Ball State has been highlighted on his talk shows as well as by the creation of a scholarship awarded annually to three Ball State telecommunications students.

His influence clearly is visible around Ball State, with the university naming the David Letterman Communication and Media Building in his honor in 2007. Campus radio station WCRD began in 1986 after he funded construction. The last three letters in the station’s call letters stand for “Cardinal Radio Dave.” He also funded a lecture and workshop series attracting business and media leaders. Letterman won 12 Emmy Awards and was nominated 52 times for his role as a television host.