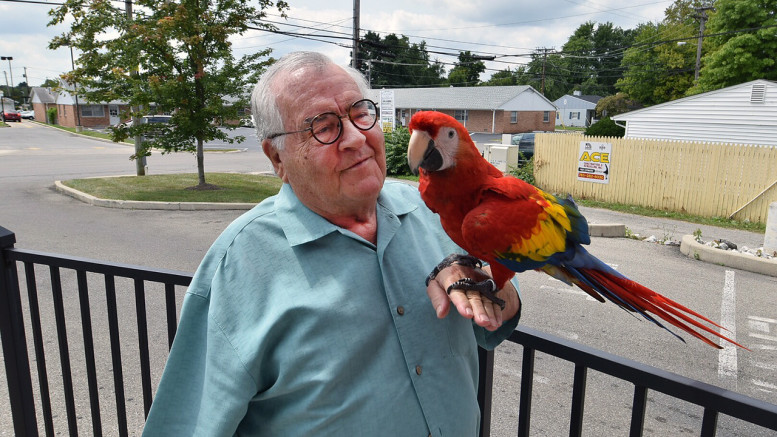 Meet Joe Mumpower and his bird, “Polly.” (If you haven’t already.) Joe and his unusual bird are very popular around some Muncie establishments.

If you’ve ever been to Starbucks on S. Tillotson Ave, Rural King, the Muncie Mission or a number of variety stores around Muncie, you may have seen Joe Mumpower and his bird, “Polly.” Polly, a male bird, is a Scarlet Macaw.

Joe is retired from Ball State, having been a residence hall director for 30 years in Elliott, Wagner, Hurst and Shively halls.

According to Joe, the species of bird has a long life span. “They live about 70-80 years,” he said. “This bird is 1 year and 3 months old. They are an endangered species. There are more of these birds in captivity than there are in the rain forest. My bird, Polly, is from Costa Rica’s rain forest. He is yellow, blue and red in color. No green.”

Joe is the third owner of this particular bird. “The first two owners thought they would love a bird like this,” he said. “The first owner had Polly for about a week. The second owners were college students who went to class and left the bird alone in a cage. These kinds of birds do not like to be in a cage. They are very social creatures. Once you put them in a cage, you ruin them. I don’t have a cage for him. I have a perch for him, and a ladder like you’d throw over the side of a ship. It’s made in the Philippines and made out of Manila hemp. Manila hemp is a type of buff-colored fiber obtained from Musa textilis, a relative of edible bananas. Polly loves to climb on that ladder. It gives him a lot of freedom. Birds like this get very bored if they are in a cage.”

Joe spends about 7-8 hours a day with his bird. He had another bird just like Polly for the first 7 months of the year. “That bird would not bond with me,” Joe said. “He thought I was a predator. So I had to re-home him. A fellow from Cincinnati came and got him and he was successful in bonding with the bird.”

Joe loves to spend time with his bird, and he enjoys taking Polly around town. 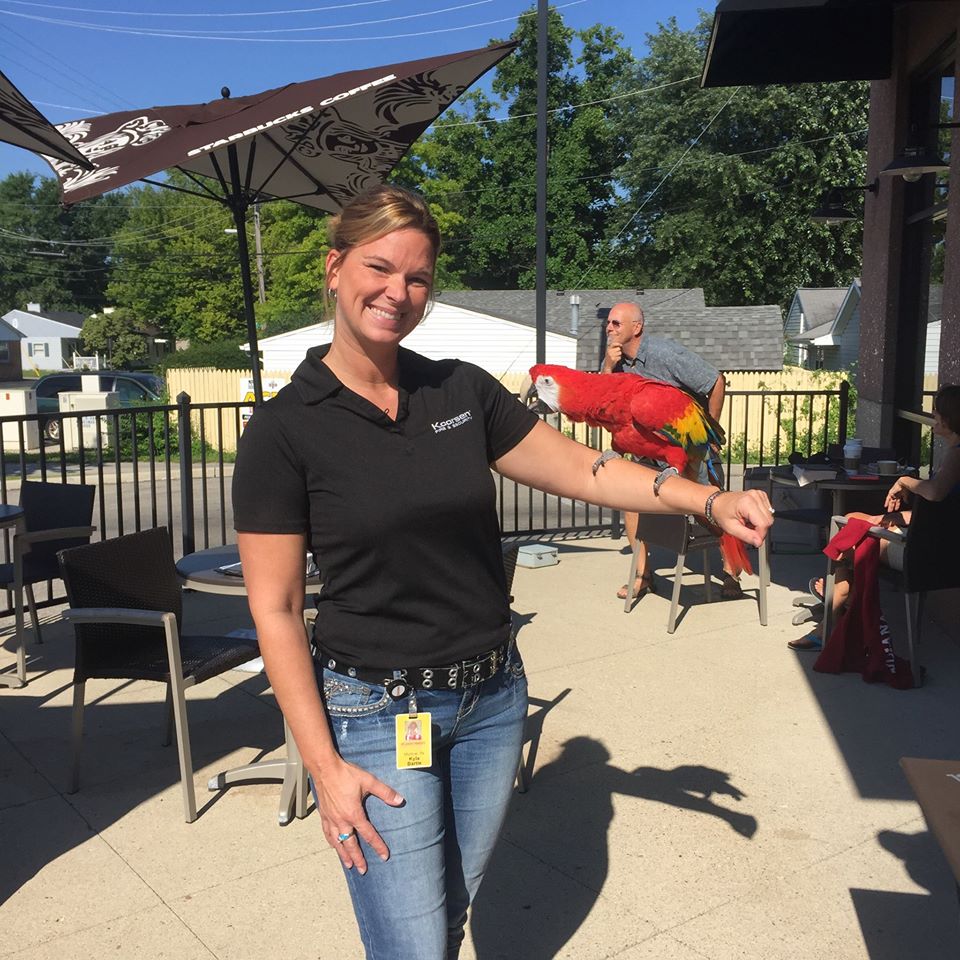 Kyla Bartle and “Polly” at Starbucks on S. Tillotson. Photo by: Hollie Amos

“This bird is very social,” Joe said. “They all have different personalities. That’s why I spend so much time with Polly. He is a very social bird.  When we go to Rural King, I push him around in a shopping cart. He loves that.”

Joe has the bird’s nails trimmed every 6 months. “They feel like you are hurting them, so they tend to reject you,” he said. “So, I go to a specialist to have Polly’s nails clipped. A bird doctor comes in twice a year and I have the doctor do it.”

Polly was trained to eat on pellets. “Pellets are much healthier for the bird,” Joe says. “ I use nuts for treats, like almonds, pecans, and pistachios.”

Joe enjoys the response he gets to the bird when he brings Polly along to various establishments in Muncie.

“I’m 80 years old,” he said. “I can go to places all day long and nobody will speak to me. But, if I bring Polly along, everyone speaks to me and wants to take pictures. Every time I go out, I get maybe 20 people that want to take a picture. Not many people have seen these birds around. Sometimes Polly will say “Hi” or “Hello.” Right now he has about 4 or 5 words he can say. His voice box is not fully developed yet. That usually takes about 5 years. After that, the maximum number of words the species can remember is usually about 20 words.”

Joe would like to meet other people that may have similar birds, so the birds can socialize with their own kind. “I’d like to get a group together so we can all meet and share our birds with each other. If you have a similar species of bird, you can email Joe at joemumpower@aol.com.

It’s unclear if Polly is a Jimmy Buffet fan. You might ask, if you see Joe and Polly around town this holiday weekend.